The struggling Russian Daria Kasatkina has barely scored a few wins in 2019, entering Rome and trying to find form before the second Grand Slam of the season in Paris. It is so far so good for the youngster, ousting a qualifier Irina-Camelia Begu 6-2, 7-6 in an hour and 35 minutes for the place in the second round, serving at 73% and fending off six out of seven break points.

The Romanian faced only three break points and she couldn't save any of those, trailing in the opener before a much better performance in set number two that saw her creating three set points. Daria played one of her best sets this season to claim the opener 6-2 with a double break before falling 5-2 down in set number two, playing against those set points in games eight and nine.

She managed to succeed, staying in contention and stealing the tie break 7-5 to wrap up a much-needed triumph and move into the next round. After retiring in the opening match in Rome, world no. 12 Caroline Wozniacki was forced to follow that path today in Rome as well, struggling with a lower left leg injury and sending Danielle Collins into the second round after the American won the tie break.

Danielle led 5-2 before Caroline started to climb back, pulling the break back in game nine to reach the tie break that Collins won 7-5 and not being able to continue the match. A qualifier Alize Cornet defeated the 9th seed Aryna Sabalenka 6-1, 6-4 in just 74 minutes, suffering two breaks and stealing the rival's serve five times after 12 double faults from the Belarusian.

Rabat champion Maria Sakkari qualified for the main draw and ousted Anastasia Pavlyuchenkova 6-1, 7-5 in an hour and 31 minutes, getting broken only once and delivering her best tennis when it mattered the most in set number two to make a winning start.

Carla Suarez Navarro overpowered a talented youngster Dayana Yastremska 6-4, 1-6, 6-3, bouncing back after a slow second set to march towards the finishing line. Belinda Bencic had to work hard for a set and a half against the 12th seed Anastasija Sevastova before celebrating a 2-6, 6-3, 6-2 win, the 27th of the season.

Sevastova had the triumph in her sight, opening a 6-2, 3-0 advantage before Belinda shifted into a higher gear, rattling off the remaining six games in set number two to build the momentum ahead of the decider. There, the Swiss lost four points behind the initial shot and broke Sevastova at love in games three and five to sail through the rest of the encounter and pass the first obstacle.

The 8th seed Ashleigh Barty defeated Viktoria Kuzmova 4-6, 6-3, 6-4 in two hours and six minutes, surviving an early scare in the deciding set and bringing the match home to kick off the campaign and move into the last 16. 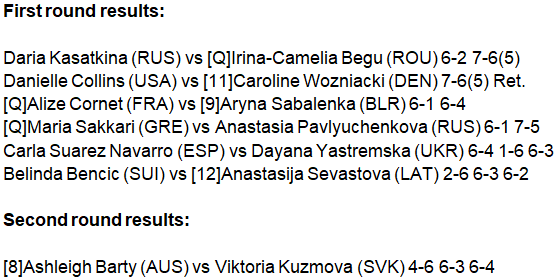 TODAY'S MOST POPULAR
Here's what Rafael Nadal had to say about whether he would play at Roland Garros 2020
THIS WEEK MOST POPULAR
Alexis Ohanian reacts to Serena Williams' racism post: “We need to do better”
Powered by: World(D) 1.6