The 7th seed and two-time Wimbledon quarter-finalist Simona Halep is off to a winning start, defeating Aliaksandra Sasnovich 6-4, 7-5. The Romanian made the difference with the second serve, losing serve only twice and delivering four on the other hand to seal the deal in straight sets, hitting 18 winners and 16 unforced errors.

The main problem for Simona is an ankle injury she suffered in the closing stages of the first set, struggling to move like she would have wanted and waiting for more tests to find out how serious the injury is. The seeded player controlled the pace in the opener with a break in the opening game and was 5-2 down in the second, barely escaping the deciding set (that could have cost her the match in the current shape) after rattling off four straight games to march over the finish line.

The 3rd seed Karolina Pliskova had to be back on the court just two days after winning Eastbourne, ousting Lin Zhu 6-2, 7-6 in an hour and 22 minutes for a good start, seeking the first significant result at Wimbledon. Karolina suffered two breaks and had to work hard in set number two after a floating opener, getting broken in game 11 and allowing Zhu four set points in the next game before converting the sixth break chance that pulled the break back for her, taking the tie break 7-4 to pass the first obstacle and reach the second round.

The Czech had 26 winners and 18 unforced errors, playing well behind the first serve and struggling to find the rhythm on the return in the second before those closing stages where she showed the spirit of a champion and avoided the decider.

The young gun Dayana Yastremska toppled the last year's quarter-finalist Camila Giorgi 6-3, 6-3, suffering four breaks and erasing that deficit with a rock-solid performance on the return that secured seven breaks in the last eight return games to move over the top on Wimbledon debut.

The 8th seed Elian Svitolina is working on a comeback after a nasty knee injury, beating Daria Gavrilova 7-5, 6-0 in swift 65 minutes. Elina had more winners than unforced errors and there was nothing wrong with her serve, getting broken once and rattling off the last eight games for the winning start and a confidence boost ahead of the next clash.

Maria Sakkari ousted Bernarda Pera while the crowd favorite Heather Watson prevailed against the young American Caty McNally in an hour and 40 minutes after a great performance in set number two. The 17th seed Madison Keys needed 62 minutes to beat Luksika Kumkhum 6-3, 6-2, losing serve once and taking half of the return points for a commanding win in no time at all.

An in-form Sofia Kenin stormed over Astra Sharma 6-4, 6-2 in 65 minutes, firing 16 winners and 12 unforced errors while never facing a break point, scoring three breaks for an encouraging start of the campaign after winning the title in Mallorca. 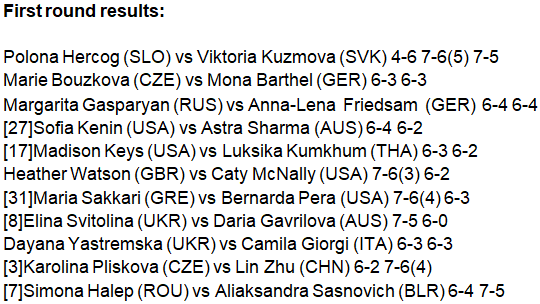