World no. 1 and one of the title favorites Ashleigh Barty is through to the second round at Wimbledon following a 6-4, 6-2 triumph over Saisai Zheng in an hour and 16 minutes. The reigning Roland Garros champion had to work hard after a good start in the opening set and it all ended well for here despite some loose moments, hitting 16 winners and 20 unforced errors to lose serve only once.

On the other hand, Barty claimed half of the return points, delivering four breaks and taking eight of the last ten games to move into the second round safely. The Chinese came from a 3-0 deficit to level the score at 4-4 before Ashleigh secured the opener with a break at love in game ten, gathering the momentum that carried her throughout the second set where she grabbed breaks in games two and eight to seal the deal and enter the last 64.

The 9th seed and quarter-finalist from six years ago, Sloane Stephens defeated Timea Bacsinszky 6-2, 6-4 in 68 minutes, thundering towards 25 winners and 22 unforced errors and leaving the Swiss far behind in every department.

Timea did break twice but she couldn't have hoped for a better result after barely hitting any winner, waiting for Sloane to make a mistake and not being able to impose her shots. The American closed the opening set with three straight breaks and moved 5-2 up in the second before Bacsinszky pulled the break back in game nine, only to suffer another break in the tenth game to propel Stephens into the second round.

Lauren Davis took down Kateryna Kozlova 6-3, 6-2 in an hour and 13 minutes, controlling the pace in the rallies and clocking seven breaks to move over the top in no time at all. The 21st seed Elise Mertens had an easy day at the office, toppling Fiona Ferro 6-2, 6-0 in 48 minutes, dropping only 12 points on serve and dominating on the return to take the last seven games and march through.

The young Briton Harriet Dart scored her first Wimbledon triumph, ousting Christina McHale 4-6, 6-4, 6-4 in two hours and 19 minutes, taking two points and one break more than her rival to prevail in the crazy deciding set that saw seven straight breaks! 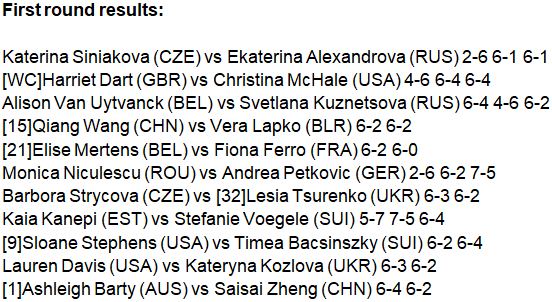