A qualifier Fiona Ferro had a great day at the office in the first round in Bronx, taking down Viktorija Golubic 6-0, 6-1 in exactly an hour. The French player lost serve once but it was all about her in the rest of the encounter, storming over Golubic in the opener and rattling off the last six games of the match to march into the second round.

Mihaela Buzarnescu ousted Laura Siegemund 3-6, 6-4, 6-0 in two hours, overcoming a slow start with an excellent performance in the second set and taking the last three games in the decider from a 4-3 down to cross the finish line first and make a winning start.

Lucky loser Anna Blinkova produced great tennis against CoCo Vandeweghe 6-3, 6-0 in 61 minutes, experiencing no obstacles in her games and stealing 60% of the return points, shifting into a higher gear from 3-2 down in the opening set to grab ten consecutive games and race towards the victory and the place in the second round.

Andrea Petkovic took down the 4th seed Shuai Zhang 6-3 6-4 in an hour and 23 minutes, losing serve three times and erasing that deficit with a rock-solid performance on the return that saw her taking five breaks from ten opportunities, enough to go through in straight sets.

The German claimed the opener with breaks in games six and eight, wasting a 3-0 advantage in set number two before bouncing back to secure the win with a break at 4-4. Camila Giorgi needed 67 minutes to dismiss Margarita Gasparyan 6-3, 6-2, controlling the scoreboard all the time after getting broken once, earning two breaks in both sets to advance into the next round.

The 10th seed Karolina Muchova toppled Viktoria Kuzmova 7-5, 6-2 in 69 minutes, unleashing fury from the initial shot and dropping only eight points to mount the pressure on the other side, something Kuzmova couldn't follow.

There were no break chances in the first 11 games and once Muchova found the way to grab a break in game 12 it was all about her, taking two breaks in set number two for the best possible start of the inaugural Bronx campaign.

The 5th seed Katerina Sinakova defeated Yafan Wang 6-3, 6-2 in an hour and 18 minutes, fending off six out of eight break chances and stealing the rival's serve five times to control the scoreboard and stay in front all the time. 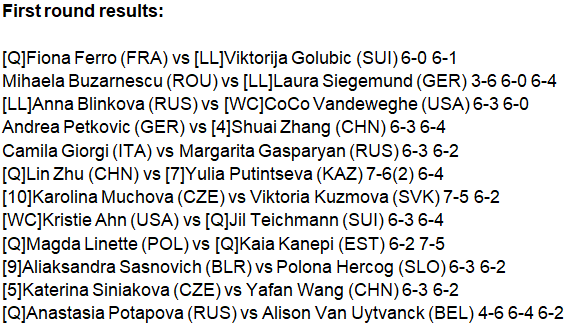