World no. 2 Ashleigh Barty had to work in the US Open first round, defeating Zarina Diyas 1-6, 6-3, 6-2 in an hour and 42 minutes for the seventh victory in New York. The Aussie served at only 43% and made 27 winners and 36 unforced errors, finding the rhythm in sets two and three where she lost only nine points behind the initial shot overall, mounting the pressure on Diyas and racing towards the finish line.

Despite hitting only one winner, Diyas controlled the pace in the opening set and ran into a 5-0 lead, breaking Ashleigh in games two and four and closing it with a hold at love at 5-1. With no room for errors, Barty raised the level in set number two, serving well and taking the last three games at 3-3 to set up a decider where she stole the rival's serve in games three and seven to book the place in the second round.

The 12th seed Anastasija Sevastova took down Eugenie Bouchard 6-3, 6-3 in 74 minutes, getting broken twice but taking half of the return points for five breaks from nine opportunities, enough to propel her into the last 64.

The Latvian took 14 of the first 17 points to forge a 4-0 lead, allowing Bouchard to erase one break but serving well in the remaining games for a 6-3, delivering three breaks in set number two to move over the top and make a winning start at the event where she played in the semi-final a year ago.

Ana Bogdan is through to the second round for the fourth time in a row, toppling Harriet Dart 6-3, 6-1 in 71 minutes after losing only 14 points in her games. The Briton couldn't convert the only break points she earned, struggling on the second serve and getting broken four times from ten opportunities given to the Romanian who rattled off nine straight games at one point to move far ahead of her rival.

The 16th seed Johanna Konta ousted the struggling Russian Daria Kasatkina 6-1, 4-6, 6-2 in just over two hours, dominating with 33 winners and stealing 49% of the return points, enough for six breaks and rock-solid display in sets one and three for the first victory in New York since 2016.

Champion in New York from three years ago, Angelique Kerber can't find the desired form in the last couple of months, suffering a 7-5, 0-6, 6-4 loss to Kristina Mladenovic in two hours and 24 minutes. Both players had more winners than unforced errors in a high-quality contest, with 12 points more on Kerber's side thanks to that second set when she had the upper hand from start to finish.

That wasn't enough to carry her home, though, dropping the last three games in sets one and three to push Kristina through to the second round. Margarita Gasparyan toppled Priscilla Hon 7-6, 6-4 in an hour and 34 minutes, saving a set point in the opener and overcoming a 5-3 deficit to steal it in the tie break.

The second set offered seven breaks in ten games, with Gasparian securing four to cross the finish line first and claim the first US Open victory. The 22nd seed Petra Martic bested Tamara Zidansek 6-4, 4-6, 6-1, shifting into a higher gear in set number three with three breaks of serve for the first victory in New York since 2011! 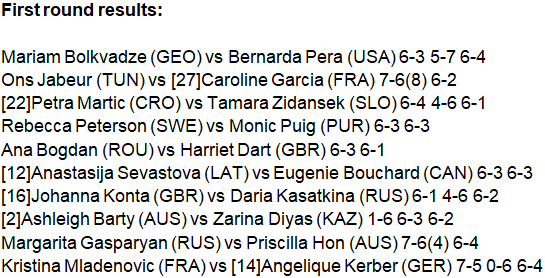 TODAY'S MOST POPULAR
Roger Federer's most curious records
THIS WEEK MOST POPULAR
Alexis Ohanian reacts to Serena Williams' racism post: “We need to do better”
Powered by: World(D) 1.6