The 3rd seed Karolina Pliskova was forced to dig deep in the first round of the US Open, defeating Tereza Martincova 7-6, 7-6 in an hour and 46 minutes. The finalist in New York from three years ago had only four aces, offering Martincova six breaks of serve and delivering the exact number on the return to reach tie breaks that she won to march on and avoid spending more time on the court.

They kicked off the action with six breaks, with a couple more in games nine and ten to set up a tie break that Pliskova won 8-6 in just under an hour. The better-ranked player raced into a 3-0 lead in set number two, squandering both breaks in games four and eight to keep Martincova in contention until another tie break that Karolina won 7-3 for the place in the second round, reaching at least the quarter-final here in the last three years.

Ekaterina Alexandrova needed 63 minutes to dismiss Samantha Stosur 6-1, 6-3, losing serve once and storming over the experienced Aussie on the return to take 60% of the points and score five breaks that pushed her through in no time at all.

The first set lasted for less than 25 minutes and it was all about Alexandrova who took six straight games for a 6-1, taking the last three games in set number two from 3-3 to advance in straight sets. Lauren Davis grabbed the first US Open win since 2016, beating Johanna Larsson 7-5, 6-2 in an hour and 33 minutes.

Larrson had a massive 5-2 advantage in the first set, wasting a set point in game eight and dropping five straight games to hand the set to the American. With the momentum on her side, Davis had the upper hand in the second set, taking it 6-2 with breaks in games three and seven to march over the top in style.

The 32nd seed Dayana Yastremska prevailed against Monica Niculescu 6-4, 1-6, 6-2 in an hour and 55 minutes, winning two points more than the Romanian for the first victory in New York. Notching just one game in set number two, Dayana recovered her game in the decider to produce four excellent service games and stealing the rival's serve in games four and eight for the place in the last 64.

The 29th seed Su-Wei Hsieh had to battle for two hours and 20 minutes against Jana Cepelova in a 6-4, 5-7, 6-3 triumph, taking three points more in the encounter with no less than 20 break chances. The breaks of serve were all over the place in the first part, kicking off the action with seven breaks in the first eight games, four for Hsieh who closed the set with a hold in game ten.

The second set started with eight breaks on both sides and this tie it was Cepelova who had the advantage when it mattered the most, breaking the rival in game 12 before gathering breaks in games one, seven and nine that sent her through.

Aliaksandra Sasnovich overpowered Jennifer Brady 6-1, 4-6 6-0, delivering a bagel in the third set and hoping to score another victory for the most prominent result at this event. Alison Van Uytvanck and Karolina Muchova made the winning start, with Muchova taking down Elena Rybakina 6-4, 6-4.

In the clash of the youngsters, Iga Swiatek demolished Ivana Jorovic 6-0, 6-1 in 55 minutes, giving away only 11 points on serve and taking 70% of the return points for complete domination and the first triumph at this Major.

Venus Williams delivered similar 6-1, 6-0 win over Saisai Zheng in 66 minutes, fending off all four break chances and using hers on the return, securing five breaks and making the best possible start. Venus had the advantage right from the start, delivering a bagel and staying on a strong course in set number two to race over the top and set the second-round clash with Elina Svitolina. 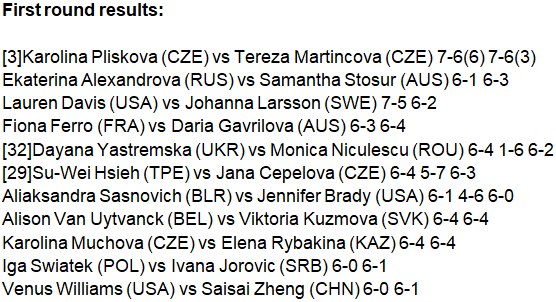