World no. 1 and the defending US Open champion Naomi Osaka is through to the third round after a 6-2, 6-4 triumph over Magda Linette in 71 minutes. Naomi served at 46% and drew the most from it, getting broken only once and overcoming an early deficit at the beginning of the second set to advance and stay on the title course despite hitting more unforced errors than winners.

The Japanese claimed five straight games from 2-1 down in the first set for a 6-2 after a half an hour, dropping 12 of the first 15 points in the second set to find herself 3-0 down, facing three more break chances in game four that could have pushed her further behind.

Linette wasted her opportunities and that would cost her dearly, suffering breaks in games five and seven and handing six of the last seven games to Naomi who will now face Cori Gauff or Timea Babos. Making her US Open debut, Fiona Ferro took down Kristina Mladenovic 6-4, 6-7, 6-3 in two and a half hours in the encounter with 21 breaks of serve!

The younger player delivered four breaks in the opener for a 6-4, losing three games in a row from being 5-1 up before closing it with a break at love in game ten. The second set lasted for more than an hour, with Mladenovic overcoming a 5-3 deficit and taking the tie break 7-3 to set up a decider.

There, Ferro earned four straight breaks to control the scoreboard and move over the top for only the second Grand Slam victory. In another marathon clash, Maria Sakkari overpowered Shuai Peng 6-7, 6-4, 6-2 in two hours and 41 minutes, converting six out of 17 break chances and playing better in the opening stages of sets two and three to grab five breaks that propelled her over the finish line, reaching the third round for the second time in three years.

A teenager Dayana Yastremska toppled Rebecca Peterson 6-4, 6-1 in 76 minutes, losing serve just once and taking half of the return points to control the pace all the time and reach the last 32. Dayana grabbed the opener with breaks in games one and seven, settling into a nice rhythm and earning three breaks in set number two for another notable result at Majors in 2019.

The 20th seed Sofia Kenin survived a marathon opening set against Laura Siegemund to notch a 7-6, 6-0 victory in an hour and 41 minutes, advancing into the third round for the third straight year in New York. Landing 81% of the first serve in, the young American got broken only once, overcoming an early deficit in the first set and breaking back at love in game five before they produced seven powerful holds for a tie break that Sofia won 7-4 after 70 minutes!

Siegemund had nothing left in the tank for set number two, barely earning a point on the return and suffering three breaks to allow a bagel and push Kenin through. Karolina Muchova ousted Su-Wei Hsieh 6-1, 4-6, 7-6, squandering a 4-2 lead in the final set and three match points at 6-5 before bringing the victory home with a 7-2 result in the tie break, reaching the last 32 here for the second year in a row.

After three early exits in New York, Andrea Petkovic is through to the third round following a 6-4 6-4 win over the 6th seed Petra Kvitova in an hour and 35 minutes, claiming the opener with a break at 5-4 and bouncing back in the second to take the last four games and deliver a great win over the rival who is still far away from 100%. 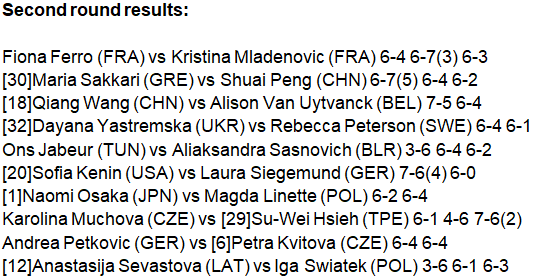