The defending Wuhan champion Aryna Sabalenka is through to the third round after a commanding 6-1, 6-0 win over Danielle Collins in 51 minutes. As the result suggests, the Belarusian had the upper hand from start to finish, dropping ten points behind the initial shot and taking 64% of the return points to grab six breaks from ten chances, rattling off 12 straight games for the best win of the season so far.

Competing for the first time since San Jose, an 18-year-old Amanda Anisimova took down Samantha Stosur 6-3, 3-6, 6-3 in an hour and 49 minutes, saving four out of seven break points and seizing four chances on the return to cross the finish line first against the opponent who played in the final in Guangzhou just two days ago.

From a break down in the final set, the youngster claimed five of the last six games for a significant victory and the place in the second round. Elise Mertens toppled Katerina Siniakova 6-4, 6-0 in an hour and 26 minutes, fending off all four break chances and taking the last seven games to seal the deal in style and make the best possible start.

After five straight losses, Garbine Muguruza scored the first triumph since Roland Garros after beating Shuai Peng 6-3, 6-2 in 69 minutes. Garbine lost 14 points in eight service games, saving all five break chances and taking almost half of the return points for four breaks and the upper hand from start to finish.

The 15th seed Sofia Kenin won the title in Guangzhou on Saturday and has stayed on the winning way, ousting Anastasia Pavlyuchenkova 6-2, 7-6 in an hour and 40 minutes, getting broken twice and earning four breaks to seal the deal in straight sets.

The Russian hit 11 double faults and lost almost half of the points in her games, squandering a break advantage in both sets to finish her campaign in the first round and push Sofia through. 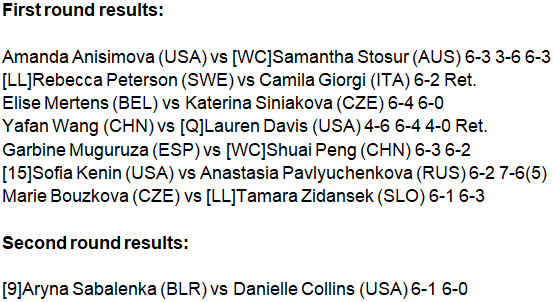