Viktoria Kuzmova is through to the second round in Linz, beating Julia Grabher 6-4, 6-2 in an hour and 13 minutes. The Slovak lost only 12 points in nine service games, fending off two out of three break points and stealing almost half of the return points to earn four breaks from nine chances and control the scoreboard.

They traded breaks in games four and five in the opener and it was all about Kuzmova in the rest of the encounter, delivering comfortable holds in games seven and nine and closing the opener with a break in game ten. From 2-2 in set number two, Viktoria grabbed four straight games to move over the top and book the place in the second round.

In a much longer encounter, Kateryna Kozlova took down Anna Blinkova 6-1, 6-7, 7-6 in two hours and 54 minutes, after 37 break chances up for grabs! Kozlova did lose serve seven times but also scored nine breaks from 29 opportunities, forging a 6-1, 5-3 advantage before Blinkova bounced back to 5-5 and saved two match points on the return at 5-6 to prolong her chances, taking the tie break 7-1 to set up a decider.

The Russian led 3-1 in the decider before they rattled off seven straight breaks, four for Kozlova who trailed 5-4 and 6-5 and kept coming back to force a tie break that she won 7-5 to move over the top and reach the second round.

Andrea Petkovic had an easy day at the office, ousting Jil Teichmann 6-1, 6-1 in 68 minutes. The German lost serve only once and was all ver the Swiss on the return, taking almost 60% of those points and seizing six out of 14 break chances to stay in front all the time and march into the last 16.

The 15-year-old Cori Gauff will not have the opportunity to compete in the main draw, losing to Tamara Korpatsch 6-4, 6-2 in an hour and 13 minutes. The more experienced player fended off three out of five break points and stole the American's serve five times, coming back from 3-1 down in the opener and rattling off the last five games in the second set to find herself in the main draw.

The top seed Misaki Doi has also secured the main draw action, taking down the 11th seed Jasmine Paolini 4-6, 6-2, 6-3 in two hours and four minutes. There were 31 break chances up for grabs and the Japanese player defended 12 out of 17, overcoming a slow start and prevailing with three breaks of serve in the decider. 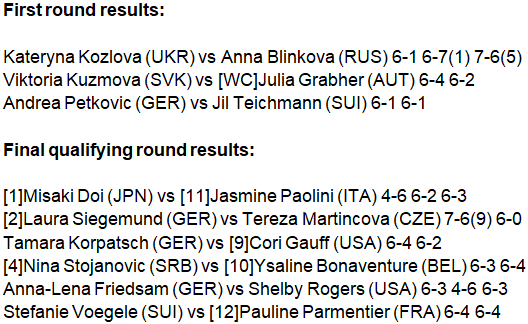