After an early loss in Palermo last week, the 3rd seed Elise Mertens is through to the quarter-final in Prague. The Belgian took down Camila Giorgi 6-4, 6-2 in an hour and 43 minutes, beating the Italian for the second time in as many encounters.

Elise lost 17 points in nine service games, dominating with the first serve and fending off four out of five break chances to keep the pressure on the other side of the net. Losing half of the points in her games, Giorgi couldn't stand a chance against such a strong rival, suffering four breaks from nine opportunities offered to Mertens and finishing her journey in the second round.

The opening set lasted for more than an hour, and we saw seven break chances and numerous deuces. They traded breaks in games two and three, and it was Mertens who had the upper hand behind the initial shot after that, securing a break in a marathon game seven (Camila squandered some six game points) and closing the set with a hold at 15 in game ten.

Elise grabbed breaks in games three and seven in set number two, fending off four break chances in game six and sealing the deal at 5-2 for the place in the quarters. Ana Bogdan will compete in the WTA quarter-final for the first time since Bogota in April 2018, receiving a walkover from a qualifier Lesia Tsurenko.

Kristyna Pliskova is through to the second quarter-final of the season, beating the 2nd seed Petra Martic 6-1, 7-5 in swift an hour and 21 minutes. The home favorite was the runner-up in Prague in 2017, playing well again and hoping for another deep run following an excellent performance against the better-ranked opponent.

Martic couldn't match those numbers, suffering three breaks and losing in straight sets despite a solid effort in set number two. Keeping the rallies on her racquet, Kristyna claimed the first set in just over 20 minutes, serving well and earning breaks at 15 in games two and six for a 6-1.

Raising her level, Petra was there to fight in set number two, defending her serve nicely and staying neck and neck with Pliskova in the first ten games. The Croat wasted game points at 5-5, suffering a break and allowing Kristyna to seal the deal with a hold at 30 a few minutes later and remain on the title course. 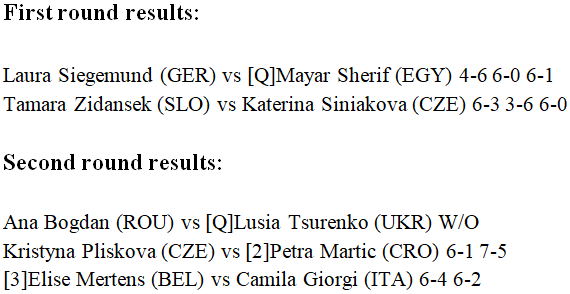