Las Vegas is slowly losing its gambling crown to online meccas, such as with the authentic live roulette wheels and movie franchise themed slot-machines of these online casinos enticing gamblers away from traditional establishments.

However, one thing that cannot be taken away from Las Vegas is its place in tennis history, namely as the birthplace of American tennis-legend Andre Agassi.
During his early years Agassi was trained by his father Mike using unorthodox and punishing methods.
Agassi's autobiography revealed that Mike would fix his son to a spot, well within the court's baseline, and have a tennis ball machine mercilessly pelt the young Andre until he had the speed and racket-head control to send them all back.
Whilst this brutal style of training did not instil in the young Agassi a love for the game, more a burning burden, it was effective in building the counterpunching foundations of Andre's Grand Slam winning game.

Agassi turned professional at the age of 16 and promptly won seven professional titles in his first two years on tour, becoming the first tennis player to surpass $1 million dollars prize-money in just 43 tournaments played.
Agassi went on to be one of the most successful teenager players in tennis history, being ranked number-three in the world by 1988 and being voted Most Improved Player for that year also.
Despite these mainstream successes, Agassi was still an unorthodox player and person in many respects.
Not only did Agassi decide to miss the Australian Open for the first eight years of his career but he also refused to participate at Wimbledon between 1988 and 1990 due to his disagreement with their all-white clothing policy. 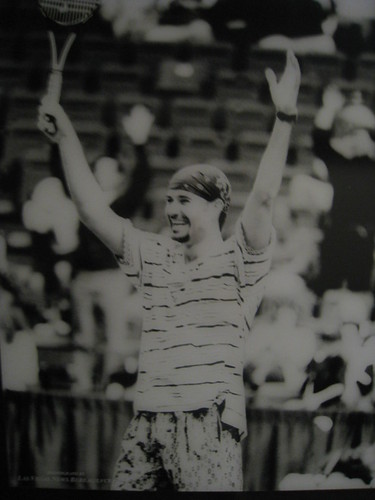 Despite these eccentricities, Agassi's smooth groundstrokes, sharp-angled returns and deadly anticipation saw him reach his first Grand Slam final at the 1990 French Open. However, even this achievement was somewhat tainted by Agassi's unusual personality.

Agassi had always subverted the traditional, preppy style and manner of past tennis players. The Nevada-native preferred tie-dye to white, sported a peroxide mullet and often wore punky earrings. Therefore it not that surprising that during his French Open loss to Andres Gomez, Agassi later revealed he was distracted by keeping his wig on during proceedings.

Agassi did eventually tone down this detrimental image consciousness and went on to win the 1992 Wimbledon Championship for his maiden major title, after losing his second Grand Slam final to future rival Pete Sampras at the US Open.

Sampras, despite Agassi once confiding to his coach that he thought Sampras would never make it as a pro, would go on to become the most significant obstacle in Andre's career. Agassi would never be able to consistently neutralise Sampras big serve and one-two punch tactic and would lose the majority of the Grand Slam matches they contested.
Agassi would win three majors during this first stage of his career, winning each of the Grand Slams except the French Open by 1995, but he would soon be derailed by romantic troubles, drug taking and motivational issues.

By 1997 a wrist injury, combined with a growing addiction to crystal methamphetamine caused by the breakdown of his marriage to actress Brooke Shields, had caused Agassi's ranking to plummet to 110. However, due to a later admitted lie on Agassi's part, he was not suspended from the tour for his drug-use and began an extensive conditioning regime in 1998 to make his way back to the top of the game.

The newly focused, professional and tactical Agassi saw his ranking skyrocket from 110 to 6 in 1998 due to a string of strong performances outside the Grand Slams.
However, it was 1999 which saw Agassi truly returned to form, completing his career Grand Slam at the French Open.

Along with his gold medal at the 1996 Olympics, Agassi became only one of two players, the other being Rafael Nadal, to have won all five of tennis's top titles.
The American won the US Open this year also before going on to win in the following years, amongst which saw Agassi reclaim the number-one ranking.

A string of injuries, soon after his final Grand Slam title in 2003, saw Agassi quickly fade and then retire.
However, Agassi's late career revival was one of the best the sport has ever seen and we can only wonder how far Andre could have gone if he had found such dedication and motivation earlier in his career. 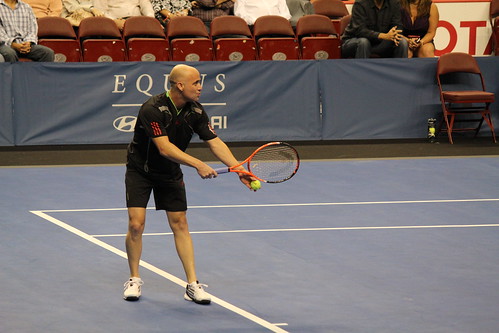