Since the beginning of the Open era in April 1968, only eight players have reached more than 12 Major finals. Jimmy Connors did that first, followed by Bjorn Borg and Ivan Lendl. The most significant players from the 90s, Pete Sampras and Andre Agassi, also joined the list before Roger Federer, Rafael Nadal and Novak Djokovic stole the show, competing in 90 Major finals and leaving all the legends from the past far behind.

Collecting 13 Major finals is an impressive feat that becomes even more exclusive when we think about Rafael Nadal's record at Roland Garros. Last October, Nadal became the first player in the Open era with 13 finals at a single Major, moving in front of Roger Federer, the 12-time Wimbledon finalist.

Rafa and Roger are the only players with more than nine title matches at a single Major, earning the records on the beloved surfaces and standing in front of Novak Djokovic. Instead of May and June, Rafa chased another impressive run in Paris in October, battling cold weather and the new Wilson balls.

Having to change some elements of his game and become more aggressive, Nadal produced an incredible level of tennis, getting broken eight times in seven encounters and toppling all the rivals on the return to add the 20th Major crown to his tally.

At 34, Nadal became the third-oldest champion in Paris, embracing his fourth Roland Garros journey without losing a set and lifting the 60th ATP title on clay in a career, 16 years after the first one in Sopot. Nadal ousted Egor Gerasimov in the first encounter, dropping only 13 games in the following 12 sets versus Mackenzie McDonald, Stefano Travaglia and Sebastian Korda to advance into the quarters.

Rafael Nadal became the first player with 13 finals at a single Major.

The young Italian Jannik Sinner pushed Rafa to the limits in the opening two sets, serving for the first at 6-5 but losing it in the tie break. Nadal gained control to seal the deal in straight sets and arrange a tough clash against Diego Schwartzman.

In another powerful performance, Rafa scored a 6-3, 6-3, 7-6 victory in just over three hours, losing ground a bit in the second part of the third set but fixing that in the tie break to advance into the 13th Roland Garros final and steal a massive record from Roger Federer.

Battling for the 20th Major title and 13th in Paris, Nadal defeated world no. 1 Novak Djokovic 6-0, 6-2, 7-5 in two hours and 41 minutes, producing impressive numbers on serve and return to seal the deal in style and write the record books. 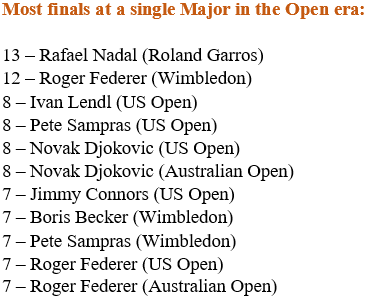