Super talented Spaniard Carlos Alcaraz was unranked three years ago, mainly because he was still 15! Carlos did not need too much time to show his full potential, standing on the verge of the top-300 a year later and wrapping up the 2020 season in the top-150 at 17.

Hungry for more, the young Spaniard delivered 32 ATP victories in 2021, claiming his first ATP title in Umag and becoming a Major quarter-finalist at the US Open. The El Palmar native wrapped up the season with the ATP Next Gen Finals crown in Milan and got ready for more success in 2022.

This year, Carlos is 7-1, losing to Matteo Berrettini in a thriller at the Australian Open and conquering the ATP 500 event in Rio last week to lift the second ATP title. Alcaraz became the youngest ATP 500 champion since the series was established in that format in 2009.

More importantly, an 18-year-old cracked the top-20 on the following day as the third-youngest player since the start of the ATP Tour in 1990, joining Andrei Medvedev and Pete Sampras on the exclusive list. At 18 years and nine months, Carlos left his great compatriot Rafael Nadal behind, with Rafa cracking the top-20 at 18 years and ten months in 2005.

Thus, Carlos is the youngest active player to enter the mentioned group and the 14th youngest since the start of the ATP ranking in 1973, joining some impressive names on the list.

Carlos came to Rio ranked 29th and made a slow start against a compatriot Jaume Munar before toppling him in sets two and three.

In the second round, the Spaniard defeated Federico Delbonis and took down world no.6 Matteo Berrettini in three sets to enter the last four. Fabio Fognini fought well in the second set, but the youngster beat him 6-2, 7-5 to find himself in the title clash.

World no. 14 Diego Schwartzman stood between a teenager and an ATP title, and Carlos produced a 6-4, 6-2 triumph to lift the trophy and write the ranking history, becoming the youngest top-20 player since 1993! Unwilling to stop, the Spaniard will chase even higher positions in the rest of the year, wishing to become world no.

1 one day and a Major champion. 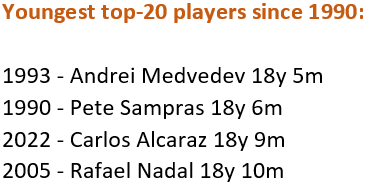 TODAY'S MOST POPULAR
WTA TENNIS
Leylah Fernandez gives injury update, reveals when she plans to make comeback
'It has been difficult for Rafael Nadal to...', says top coach
Wimbledon 2022: Nick Kyrgios eats during the press conference!
Francisco Roig speaks on importance of energy for Rafael Nadal
Wimbledon 2022: Rafael Nadal's match-point and the final celebration
Novak Djokovic comments on his Wimbledon rivalry with Roger Federer
Martina Navratilova explains why she thinks Emma Raducanu won't win 2022 Wimbledon
Rafael Nadal, Roger Federer get company in London, as Andy Murray joins Team Europe
Roger Federer: 'I get up with it and go to bed with...'
Roger Federer looks back to his Centre Court debut: “Where memories are born”
THIS WEEK MOST POPULAR
WTA TENNIS
Wimbledon finalist physically harassed “at least 30 times” by staff, speaks out
Simona Halep opens on her relationship with Emma Raducanu
'I have beaten Rafael Nadal in all our matches on...', says former star
Rafael Nadal: 'I made a training disaster'
Nick Faldo comments on Brooks Koepka's move to LIV Golf
“Afraid” Simona Halep withdrew over false reason pre-Wimbledon, says former player
Three new names decided to perform at LIV Golf!
Toni Nadal to Stefanos Tsitsipas: Beat Novak Djokovic at Wimbledon, not Rafael Nadal
'The bigger chance to beat Rafael Nadal is in...', says former Top 5
Venus Williams to play mixed doubles with former world No. 1 at Wimbledon