Winning an ATP title is a special moment in every player's career. Lifting the trophy looks even better when you beat all the opponents in straight sets. Ivan Lendl, Jimmy Connors, John McEnroe, Roger Federer and Guillermo Vilas all know how to achieve that, but one player stands above them all in that segment.

Rafael Nadal has been a player of the season so far in 2022, winning three titles from four finals and claiming the 21st Major crown at the Australian Open. The Spaniard has won two ATP titles without losing a set this year, enough to become the first player in the Open era with 30 ATP titles in a perfect scenario of winning every set.

Nadal was tied with Ivan Lendl at the beginning of the new season, and he passed the great Czech with trophies in Melbourne and Acapulco. Returning from the injury, Rafa took down three lower-ranked rivals to secure the ATP 250 crown in Melbourne ahead of the Australian Open.

It moved him above Lendl, and Nadal wrapped up another tournament without losing the set in Acapulco to reach a milestone that the next generations will hardly repeat in the future. Acapulco was Rafa's 91st ATP title, gathering moments against the lower-ranked rivals and beating two top-15 stars to emerge at the top.

Nadal defeated the American trio of Denis Kudla, Stefan Kozlov and Tommy Paul to find himself in the fifth Acapulco semi-final.

Rafael Nadal is the only player with 30 ATP titles without losing a set.

Rafa faced the newly-crowned world no.

1 Daniil Medvedev and scored a massive 6-3, 6-3 triumph for a place in the final. Nadal fended off all 11 break points for the first time in a career against Daniil and controlled the pace on a high-bounce court to set the title clash versus Cameron Norrie.

The Spaniard toppled the Briton 6-4, 6-4 in an hour and 54 minutes, beating him for the fourth time in as many encounters to remain perfect in 2022. Rafa served at 79% against Cameron and got broken twice from five chances offered to his rival.

Norrie also played against five break points and experienced four breaks to hand the trophy to a 21-time Major winner. Rafa served well in the opener and grabbed one return game for 6-4. The Spaniard raced into a 5-2 lead in set number two before the Briton moved back to 4-5.

Nadal sealed the deal in game ten for his fourth Acapulco crown, 17 years after winning the first! 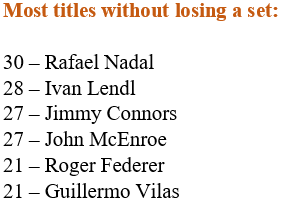