Scoring a bagel is always helpful, especially when someone delivers it on the most notable scene at Majors. Since the start of the Open era in 1968, six players have achieved at least 42 6-0 sets at the Australian Open, Roland Garros, Wimbledon and the US Open.

Andre Agassi leads the field with 50, followed by Roger Federer on 46. Jimmy Connors claimed a bagel in 44 sets at Majors, and Rafael Nadal joined him after the US Open third round and a duel against Richard Gasquet. Rafa beat Richard 6-0, 6-1, 7-5 in two hours and 17 minutes for the 18th victory from as many encounters against the Frenchman.

Nadal made the difference with his first serve and saved six out of seven break points. The Spaniard fired 35 winners and 23 unforced errors and turned over half of the return points into seven breaks that carried him through.

Nadal saved three break points in the encounter's first game and broke the rival in the next one to move 2-0 in front. Richard netted a forehand in the fourth game to fall 4-0 behind, and Rafa broke him for the third straight time at 5-0 to deliver a bagel.

Rafa served well in the second serve, and Richard could not follow that pace. The Frenchman netted a forehand in the second game to lose serve to fall further behind. Nadal built a 6-0, 3-0 advantage with a service winner before Gasquet got his name on the scoreboard in the fourth game.

Richard netted a backhand in game six to fall 5-1 behind, and Rafa placed a backhand crosscourt winner at the net in the next one to wrap up the set and move closer to the finish line.

The Spaniard painted another backhand crosscourt winner at the start of the third set to grab an early break. Suddenly, Gasquet landed a backhand volley winner in the fourth game to pull the break back and lock the result at 2-2.

Both players served well in the next six games to remain neck and neck. Nadal created three break chances in the 11th game after the rival's backhand error and wasted them. The Spaniard seized the fourth to deliver the crucial break and open a 6-5 advantage. 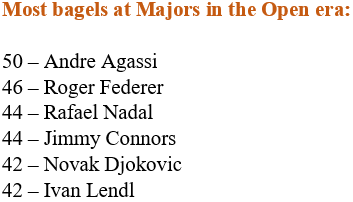