Rafael Nadal cracked the top-3 following his first Major title at the 2005 Roland Garros. Rafa achieved that a couple of days after turning 19, and he is still a part of that group 17 years later! The 36-year-old Spaniard is spending his 669th top-3 week, moving three behind Novak Djokovic, who has collected 672.

Both players still have to work hard if they want to match Roger Federer, the leader of the pack with 750 top-3 weeks! Novak missed two Majors in 2022 and did not receive 2000 points for winning Wimbledon. Those setbacks pushed him outside the top-5, and he needs good results in the rest of the season to get there again.

Nadal is the second-strongest link on the men's Tour in 2022 behind Carlos Alcaraz, winning two Major titles and having no points to defend in the rest of the year. Nadal looks good to wrap up the year in the top-3 and move in front of Novak on that list.

Nadal was back at his best in 2017, regaining his Roland Garros dominance and claiming four more Parisian titles in the previous five years. Rafa played only 29 matches in 2021 and lost ground a bit to the rivals from the top.

He played only two encounters following the Roland Garros semi-final loss to Djokovic and wrapped up the season in August to turn focus on 2022. Rafa made a perfect return and claimed his second Australian Open crown following an epic comeback against Daniil Medvedev in the title clash.

The Spaniard suffered his first loss of the season in the Indian Wells final, fracturing his rib and not playing until May. Rafa was far from his best in Madrid and Rome, struggling to find his A-game and still dealing with foot pain.

Receiving injections ahead of every match, Nadal passed all seven obstacles in Paris to claim the 14th Roland Garros crown and his 22nd Major! Rafa had to withdraw ahead of the Wimbledon semi-final, injuring his abdomen and revealing a seven-millimeter tear.

Nadal played only one match ahead of the US Open and could not fight for the fifth New York crown, losing to Frances Tiafoe in the fourth round. Rafa played the doubles match alongside Roger Federer at the Laver Cup, and he will skip a couple of weeks as he and his wife expect the first child. 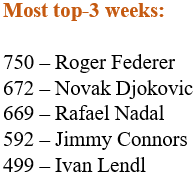