Rafael Nadal is celebrating two ranking milestones this week. Rafa became the second player with 900 consecutive weeks in the top-50, joining Roger Federer on the exclusive list. Also, the Spaniard collected his 960th top-50 week, matching Andre Agassi and moving closer to Federer, who is still far in front.

Nadal found himself in the top-50 in August 2003, two months after turning 17! Nadal lost ground a bit in 2004 after a nasty injury, missing a chance to spend the entire year in the mentioned group and starting all over in 2005.

Nadal has been ranked in the top-50 since January 31, 2005, improving his position after rock-solid results and becoming world no. 2 thanks to a Major and four Masters 1000 titles on his tally! Also, Nadal has never left the top-10 group since April 2005, earning valuable ranking records and finishing as the year-end no.

Rafael Nadal is the third player with 960 top-50 weeks.

1 after the US Open. The Spaniard did not enjoy a good run in 2021, playing only 29 matches and failing to win a Major title only for the third year since 2005! Rafa missed the second part of the season due to a foot injury and made an incredible return at the start of 2022.

Nadal went all the way at the season's first Major at the Australian Open, celebrating in Melbourne for the first time in 13 years! With a boost on his side, Rafa conquered Acapulco and reached the Indian Wells final after 20 consecutive victories.

The Spaniard fractured his rib and missed April's action and his beloved tournaments in Monte Carlo and Barcelona. With ongoing foot pain, Rafa experienced early losses in Madrid and Rome and gathered dark clouds ahead of Roland Garros.

The Spaniard needed injections to pass the best-of-five obstacles in Paris. He overcame all the challenges and took down Novak Djokovic, Alexander Zverev and Casper Ruud to lift the 14th Roland Garros crown. Rafa has been dealing with an abdominal injury since Wimbledon, withdrawing from the All England Club ahead of the semi-final and suffering the US Open fourth-round loss to Frances Tiafoe.

Nadal and his wife expecting their first child in the upcoming weeks, and Rafa should be on the court again by the end of the season. 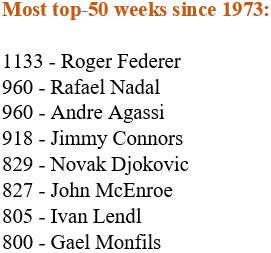