Sixteen years ago, Rafael Nadal made the Masters 1000 debut as a qualifier at the age of 16, beating Karol Kucera and Albert Costa to reach the third round and kick off an incredible journey at this level of competition. After Monte Carlo, Rafa grabbed two wins in Hamburg as well, finishing the 2003 season with four Masters 1000 triumphs and adding five to his tally in 2004 despite skipping the entire clay swing due to an injury.

Still as a teenager, Nadal claimed 28 wins and four Masters 1000 titles in 2005, becoming an instant legend of the premium ATP series and setting the tone for the next 15 years, breaking many records and standing at the top of the charts with 34 Masters 1000 titles, one more than Novak Djokovic.

Since 2005, Nadal has been one of the most consistent players at the Masters 1000 tournaments, conquering at least two titles in every year until 2010 and failing to win one only in 2015. Nadal had some of his biggest battles at the Masters 1000 events, with some memorable finals like those in Rome in 2005 and 2006 that had forged his greatness and prepared him for the Grand Slam successes.

Over the years, Nadal, Djokovic and Federer have been the players to beat at this level (together with Andy Murray), sharing almost every significant Masters 1000 record and pushing each other to the limits on numerous occasions ever since Roger Federer and Rafael Nadal stepped on the court for the first time together in Miami 2004.

The momentum went back and forth from one player to another and they are miles in front of Murray and the rest of the field in terms of match wins, with all of them passing the 340-win mark and with Rafa and Roger in front, entering this week with 377 and 378 respectively.

Roger decided to skip the Canadian Masters and the defending champion Rafael Nadal has taken the full advantage of that so far, defeating Daniel Evans and Guido Pella to add two triumphs to his tally, moving in front of Federer with 379 Masters 1000 victories.

The Spaniard will try to leave the Swiss as far as possible behind ahead of Cincinnati Masters where Roger should have the advantage again, keeping the things tight in the battle for the mind-blowing 400 Masters 1000 victories where they both should reach in 2020 and achieve another incredible milestone.

Since 2005, Rafa had only four seasons without 20 Masters 1000 triumphs on his tally, mainly due to injuries and skipped tournaments, dominating in the other years and standing strong more than 16 years after playing at this level for the first time. 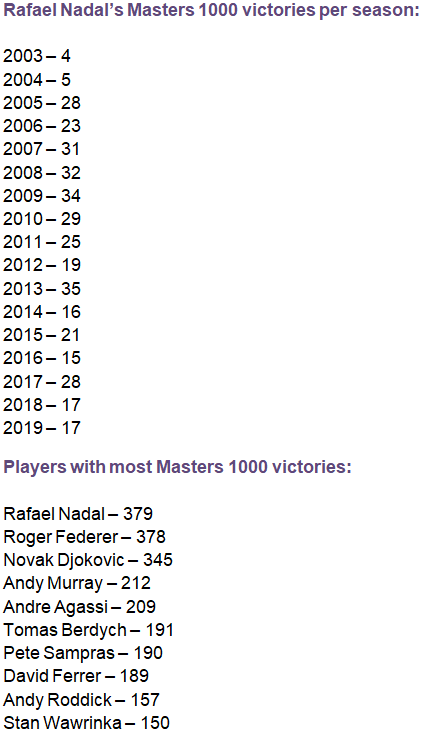