With 83 ATP titles, Rafael Nadal has been one of the most accomplished players in the Open era, conquering 18 Majors and 35 Masters 1000 crowns. The Spaniard has won 59 out of those 83 crowns on beloved clay, turning less than 440 wins on the slowest surface to almost 60 trophies, unable to come even close to that on hard court.

With 20 ATP titles on hard court, Nadal is currently ranked 13th on the Open era list, with a chance to pass Lleyton Hewitt, Andy Roddick, Michael Chang, Stefan Edberg and John McEnroe and enter the top-8 if he wins three more titles on the most dominant surface in the calendar.

Nadal claimed the 20th ATP title on hard on Sunday against Daniil Medvedev, defeating three rivals (Gael Monfils had to withdraw before the semi-final) to celebrate the 450th ATP win on hard, becoming only the fifth player in the Open era who achieved that, after Jimmy Connors, Andre Agassi, Novak Djokovic and Roger Federer!

Back in 2013, Nadal completed one of the best seasons on hard court in the Open era, conquering Indian Wells, Canada, Cincinnati and the US Open, also losing in the final of the ATP Finals and improving his record on hard significantly.

Nadal's score on hard could have been drastically better had he won some of the 26 ATP finals on that surface where he stood as a runner-up, emerging victorious in five out of 15 finals since 2014, six of those at the Masters 1000 and Grand Slam level!

Rafa was capable of winning four ATP titles on hard as a teenager, starting from the Canadian Masters in 2005 and another one in Madrid a few months later. Overall, the Spaniard has won ten Masters 1000 titles on hard as only the fifth player since 1990, standing on four Grand Slam crowns on cement courts as the seventh competitor in the Open era with that feat.

Nadal is a five-time Australian Open finalist, winning the title in 2009 and losing the next four finals, including the most recent one in January against Novak Djokovic. Rafa is also a three-time Indian Wells champion, having no such luck in Miami where he claimed 40 wins but never went all the way after five defeats in the title matches!

The Spaniard is the most successful figure at the Canadian Open after the fifth crown he lifted yesterday, adding one title in Cincinnati to his tally from that brilliant 2013. Shanghai was never the favorite tournament for Nadal who still had the opportunity to win it in 2009 (the first edition) and again in 2017, losing on the last step to Nikolay Davydenko and Roger Federer, not standing better in Paris either after advancing into only one final on debut in 2007.

The ATP Finals stands as the most significant trophy that Rafael Nadal hasn't won so far, leaving the event as the beaten finalist in 2010 and 2013. 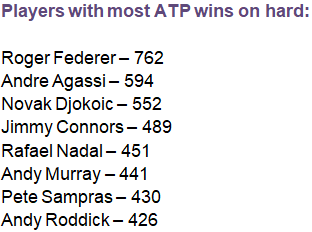