Winning 30 out of 34 matches since Indian Wells, Rafael Nadal arrived in Montreal as the top favorite to defend the title and claim the 35th Masters 1000 crown, with no Novak Djokovic and Roger Federer to challenge him in the draw.

World no. 2 defeated Daniel Evans, Guido Pella and Fabio Fognini to reach the semi-final where Gael Monfils was forced to withdraw, propelling Nadal into the fourth ATP final of the season. As it turned out, Daniil Medvedev couldn't match Nadal's pace in the title match, with the Spaniard scoring a 6-3, 6-0 victory to become the leader of the ATP Race, 500 points clear of Novak Djokovic.

Nadal had to work hard against Fabio Fognini in the quarter-final, losing the opening set before taking control for a 2-6, 6-1, 6-2 triumph in just under two hours. It was the 40th ATP win for the Spaniard of the season, passing Roger Federer and becoming the first player to achieve that before the Swiss, Daniil Medvedev, Stefanos Tsitsipas and Novak Djokovic.

Montreal is only the tenth ATP event of the season for Rafa, choosing his schedule wisely and reaching the latter stages in almost every one of them to stand on 40 wins before his closest rivals. Nadal was the finalist at the Australian Open, wasting match points against Nick Kyrgios in the second round in Acapulco and withdrawing before the semi-final clash with Roger Federer at Indian Wells.

Surprisingly, Rafa didn't enjoy the best possible season on clay, losing in the semi-final in Monte Carlo, Barcelona and Madrid before shifting into a higher gear in Rome and Roland Garros, taking 3000 points in a couple of weeks to get himself in contention for the year-end no.

1 spot. Just like in 2018, Nadal was the semi-finalist at Wimbledon for a handful 720 points, defending 1000 points in Canada and hoping to continue in the same style at the US Open. 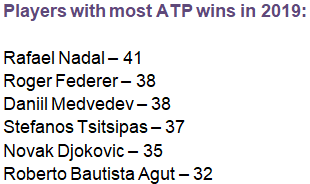