The 16-year-old Rafael Nadal was ranked just outside the top-200 at the beginning of 2003, playing on a very high level to continue the meteoric progress through the ATP ranking list. After 19 Challenger wins (four finals, including the title in Barletta) and the third-round appearance in Monte Carlo, Rafa cracked the top-100 in April and stayed on a steady course in the following months at such a young age, securing the place among the 50 chosen players in August.

Despite a nasty injury that halted his rise in the spring of 2004, Nadal managed to win the first ATP title in August and not lose too many points ahead of 2005 when his eyes were set on big targets, competing in the fourth round of the Australian Open before conquering Costa do Sauipe and Acapulco.

The best was yet to come for an extraordinary teenager, standing two points away from winning the title in Miami against Roger Federer and lifting the first Masters 1000 crown in Monte Carlo. Eager for more, Rafa headed to Barcelona with no rest and stood as the last man on Sunday, beating Juan Carlos Ferrero in the best-of-five final to grab another title and additional 300 points that sent him into the top-10 for the first time in a career.

At the age of 18 years and ten months, Rafa became the eighth-youngest player in the mentioned group since the beginning of the ATP ranking in 1973, trailing only to Aaron Krickstein, Michael Chang, Boris Becker, Bjorn Borg, Mats Wilander, Andre Agassi and Andrei Medvedev, also the only to achieve the feat at that age after 1993.

Entering the top-10 on April 25, 2005, Rafael Nadal never went away from that group, standing on 748 weeks in the elite company to leave Andre Agassi on 747 and stay on Roger Federer's and Jimmy Connors' trail. The Spaniard needs 66 weeks to catch the American who is the second-best player on the list with 814 weeks in the top-10, looking good to achieve that without any troubles considering the way he has been playing in 2019.

Rafa has won three big titles and more than 40 encounters so far this year, leading the ATP Race ahead of Novak Djokovic before the fourth Grand Slam of the season and never dropping out from the top-2 since June 2017! At the age of 38, Roger Federer is still one of the players to beat, occupying the third spot on the ATP list and adding more top-10 weeks to his tally to maintain the 130-week advantage ahead of Nadal.

Even if Roger drops out from the top-10 anytime soon, which is highly unlikely, Nadal would need more than two years in the elite group and push the Swiss into the second place. 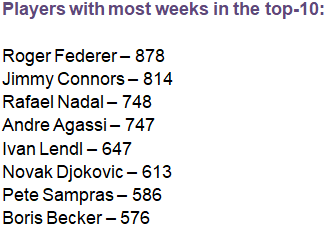