Rafael Nadal has been the best player of the season so far, claiming two Major titles and winning 48 out of 54 matches played. The 33-year-old Spaniard claimed the 12th Roland Garros crown in June and grabbed the fourth US Open title a few weeks ago, improving his tally to 19 Majors and moving just one behind Roger Federer.

Also, Rafa has been ranked second behind Novak Djokovic for almost a year now, improving his chances of finishing the year as the top-ranked player if he defends the advantage over Novak Djokovic in the ATP Race in a remaining couple of events.

Last weekend, Nadal was in Geneva for the third edition of the Laver Cup, scoring one singles win and helping Team Europe to win the third straight title, enjoying three beautiful days in Switzerland with Roger Federer and other tennis stars before taking a couple of weeks off to take more rest and plan his wedding.

Despite being away from the court, Nadal has earned an ultimate ranking milestone this week, becoming only the third player since 1973 with 700 weeks in the top-5, joining Roger Federer and Jimmy Connors on the exclusive list.

Rafa has been ranked in the top-10 since April 2005, spending the majority of that time among five best players in the world and achieving another massive ranking record that will take some beating after Novak Djokovic who should join them in two years.

Nadal spent less than 170 weeks in positions three (57), four (54) and five (66) and more than 520 in the top-2, moving closer and closer to Roger Federer on that list and preparing to pass the Swiss in just over a month.

Rafa made a top-5 debut in May 2005 after winning Masters 1000 crown in Rome following that historic victory over Guillermo Coria in the deciding tie break after five hours and 15 minutes, becoming the sixth-youngest top-5 player and the first to achieve that before turning 19 after Michael Chang in 1989.

The great Spaniard stayed in the top-5 for the next ten years, improving his game on a regular basis and becoming one of the most accomplished competitors of all time. After losing ground a little bit in 2015 and 2016, Nadal had to linger away from the elite top-5 group for some 50 weeks, returning there in April 2017 following the title in Monte Carlo, staying there ever since and gathering enough weeks to stand next to two legends like Connors and Federer. 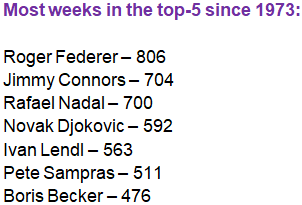 TODAY'S MOST POPULAR
ROGER FEDERER
Roger Federer "borrows" fitness coach Pierre Paganini to Stan Wawrinka
'I’m sure Roger Federer wasn’t at his best', says former Top 5
Stan Wawrinka: Novak Djokovic doesn't need a lesson from me
Rafael Nadal: 'I know how difficult it was for my parents...'
'We should be thankful for Roger Federer's longevity', says former Australian player
'Roger Federer has a way of playing that is unique', says French artist
Simona Halep said no to US Open 2020 before heading for Prague
THIS WEEK MOST POPULAR
ROGER FEDERER
In Roger Federer's words: 'I don't care what Pat Cash says, I don't know him'
Serena Williams’ AO nightmare Qiang Wang withdraws from US Open
Noah Rubin explains why Roger Federer is more likeable than Novak Djokovic
Rafael Nadal on his new yacht: It helps me restore positive energy
Roger Federer: 'I have never seen my parents and friends'
'Roger Federer said, ‘I am so happy for you', says Grand Slam champion
'It's not normal that Roger Federer, Rafael Nadal and Djokovic...', says former No. 1