For years, Roger Federer had been the leader of the pack with 528 weeks in the top-2, becoming the first player with at least 200 weeks at both no. 1 and no. 2 positions. For the first time since 2002, Federer had failed to enter the top-2 throughout 2019, allowing Rafael Nadal to catch him and become the first player since 1973 with 529 weeks in the top-2, passing Roger and standing alone on that record from Monday.

Nadal also became world no. 1, moving in front of Novak Djokovic and battling with the Serb for the year-end no. 1 spot in London, standing 640 points clear of the closest and only rival. After incredible progress in his early years on the Tour, Nadal became world no.

2 for the first time in 2005 following the title in Stuttgart, claiming no less than 11 ATP titles that year as a teenager and standing as the biggest rival of Roger Federer who was miles in front of all the opponents in his prime years.

In 2006 and 2007, Nadal established himself as the second-stronger link on the Tour before finally passing Roger in August 2008 to become world no. 1 for the first time after winning both Roland Garros and Wimbledon. Nadal's first stint in the top-2 had lasted for four years, returning there in 2013 and finding the form again after staying away from the top-2 between October 2014 and Roland Garros 2017, missing a chance to add more weeks to his tally.

Never leaving the top-10 since April 2005, Nadal has found the ultimate form again in the last two and a half years, enjoying another long run in the top-2 that has propelled him ahead of Roger Federer. If he defends 1200 points in Melbourne in January, Nadal should stay in the top-2 for many more months next year, having a chance to earn more points in Monte Carlo, Barcelona and Madrid and add more fuel to his ranking milestones that stand second to none in many aspects. 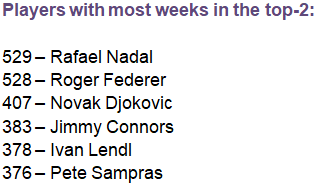 TODAY'S MOST POPULAR
Roger Federer: 'Maybe it's a fresh start that the world needs'
THIS WEEK MOST POPULAR
Alexis Ohanian reacts to Serena Williams' racism post: “We need to do better”
Powered by: World(D) 1.6