To reach the top-3 on the ATP ranking list, one has to win a Major or compete on a high level for a whole year, not the easiest thing to achieve in our competitive sport. Since 1973, only 28 players have been able to spend more than a year overall in the top-3, with the list becoming even more exclusive when we talk about those with at least four years in the mentioned group, having 12 chosen competitors in that group.

Andy Murray, Boris Becker, Andre Agassi, Bjorn Borg, Stefan Edberg and John McEnroe had spent between 226 and 374 weeks in the top-3, leaving Pete Sampras and Ivan Lendl above them with over 450 (almost 500 for the Czech).

As was expected, the top of the standings belongs to Novak Djokovic (569) and Jimmy Connors (591) who are ranked only behind two of the greatest players in the Open era, Roger Federer and Rafael Nadal. The Swiss is miles in front of everyone, gathering 748 weeks in the top-3 and improving that number although he turns 39 in August.

Rafael Nadal has earned a massive milestone on Monday, becoming the second player since the beginning of the ATP ranking with 600 weeks in the top-3, joining Federer on the exclusive list and adding another cool fact to his already impressive tally.

The Spaniard found himself in the top-3 for the first time after lifting the first Major crown at Roland Garros, just a couple of days after turning 19, standing strong in the mentioned group only a few months before turning 34.

In that first stint, Rafa stayed in the top-3 for more than seven years (excluding two weeks during Miami 2010), struggling with an injury and bowing out from the top-3 in the next 12 months, only to return stronger in August 2013.

For the next year and a half, Nadal was among three best players in the world again, dropping out in April 2015 and not returning for over two years after the darkest period of his career, plagued with injuries and mediocre results, at least for his standards as he never left the top-10.

After winning the tenth crown at Roland Garros in June 2017, Rafa made a remarkable comeback and never left the top-2 again, battling with Novak Djokovic and Roger Federer for the no. 1 spot and delivering consistent results for almost three years now to achieve that record and join Federer on the exclusive list.

Novak Djokovic should accomplish this in 31 weeks, playing on a high level and returning to world no. 1 spot after conquering the ATP Cup and the Australian Open. 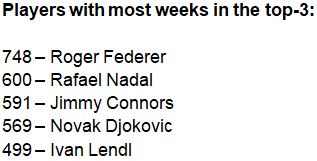 TODAY'S MOST POPULAR
SERENA WILLIAMS
Serena Williams trains with her daughter in Australia!
Nick Kyrgios on his comments on Novak Djokovic: I ain't holding back
Dominic Thiem: 'Rafael Nadal is in the league of his own at Roland Garros'
Roger Federer: 'You can’t have a career as long as I have unless...'
Dominic Thiem: 'I want to beat Rafael Nadal and win Roland Garros'
Boris Becker: 'Novak Djokovic made right and legitimate move'
Serena Williams' Wimbledon win less likely than Harry and Meghan's divorce
THIS WEEK MOST POPULAR
WTA TENNIS
Venus Williams getting married soon?
Garbine Muguruza: "Roger Federer's proposal will end up in oblivion"
'There was no way Roger Federer could win matches...', says legend
Naomi Osaka's last quarantine post infuriated the fans!
Adele’s “Set Fire to The Rain” featuring Roger Federer and Rafael Nadal
Serena Williams' daughter shows her two-handed backhand!
'We would beat Roger Federer, Rafael Nadal and Djokovic now', says ATP ace