Widely considered as the greatest clay-court player of all time, Rafael Nadal has been the dominant figure on the slowest surface in the last 15 years, lifting 59 ATP titles on his beloved clay. Also, it is easy sometimes to forget how successful the Spaniard is on hard courts as well, winning 22 titles from 48 finals on the most common surface.

Nadal's first nine ATP titles in 2004 and 2005 came on clay, although he played for the first ATP title on hard court in Auckland at the beginning of 2004 when he was only 17. In the next 16 years, Rafa has fought for some of the most notable ATP events on cement, advancing into ten Major finals as one of only six players in the Open era and 19 at the Masters 1000 level, joining Roger Federer, Novak Djokovic and Andre Agassi on that feat.

Last Saturday, Nadal joined Pete Sampras on 48 ATP finals on hard court, beating five rivals to lift the trophy in Acapulco, the first since the US Open last September. Rafa lost in the final of the inaugural ATP Cup to Novak Djokovic, failing to win another team competition for Spain and switching focus on the Australian Open where he played in the final a year ago.

The Spaniard couldn't repeat that this January, suffering a tight loss to Dominic Thiem in the quarter-final and allowing Novak Djokovic to become world no. 1 again. After playing in Kuwait and South Africa, Nadal traveled to Acapulco where he lifted the third crown, the first since 2013.

Facing no rivals from the top-20, Nadal lost 25 games in ten sets, struggling a little bit only against Miomir Kecmanovic and sailing towards the title after two identical triumphs over Grigor Dimitrov and Taylor Fritz. 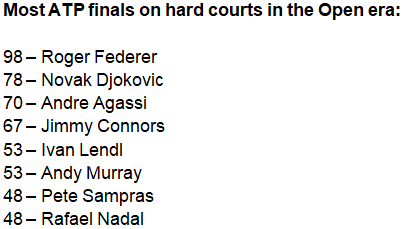