In the last couple of years, the 30s have become the new 20s, with many players producing their best tennis in the fourth decade of life. With more advanced training, better nutrition and health care overall, the players have been able to compete on a high level even at 35 or more, with 11 players older than 33 on the latest ATP ranking list.

At the beginning of the Open era, when tennis wasn't as physical as today, we had some incredible players capable of playing on a high level well after turning 38 or even 40, with Pancho Gonzalez and Ken Rosewall achieving many age records that will take some beating.

Turning 30 in the first season of the Open era (1968), Rod Laver has been the most successful player in terms of the ATP titles in that age group, claiming no less than 47, including a "real" Grand Slam in 1969.

Born in 1934, Ken Rosewall turned 34 in 1968 but that was hardly an obstacle for the great Aussie, lifting 33 ATP titles in the Open era and staying at the top of men's tennis for more than two decades. During the 70s, Arthur Ashe delivered 20 ATP trophies after celebrating the 30th birthday, followed by his Wimbledon final rival Jimmy Connors who claimed 14.

After many ups and downs during the 90s, Andre Agassi found the perfect balance in the latter stage of his career, standing strong in 2001, 2002 and 2003 when he conquered two Australian Open crowns and six Masters 1000 trophies.

The mentioned players were the most accomplished ones after turning 30 before Roger Federer started his streak in Basel 2011, claiming Paris Masters and the ATP Finals by the end of the season and never looking back ever since, despite a nasty knee injury in 2016 that almost sent him out from the top-20.

In six of the last seven seasons, Federer was among the world's leading players with no less than four ATP titles, claiming the ATP throne at the age of 36 in 2018 and still fighting for the most notable titles despite the fact he is among the oldest players left on the Tour!

With 36 titles after turning 30, Roger stands second on the list behind Rod Laver, passing Ken Rosewall in 2019 and hoping for more of the same after making a return in Halle in June, sidelined after knee surgery he had to undergo in February.

His great rival Rafael Nadal has been moving through the list as well, lifting 16 ATP titles in his 30s so far and jumping in front of Andre Agassi after winning the crown in Acapulco at the end of February. Rafa turned 30 in June 2016, struggling to find the form due to injuries and waiting until April next year to add his name to this story in Monte Carlo.

Five other titles followed in the rest of 2017, with the Spaniard adding five more in 2018 and four in 2019 to find himself in the top-tier of this age record. Tied with Agassi at the beginning of 2020, Nadal passed the American with his first ATP title of the season in Mexico, beating five rivals in straight sets to become the fifth player with at least 16 ATP trophies after turning 30, trailing four behind his next target Arthur Ashe.

With a coronavirus, it is uncertain what will happen with the tennis schedule in the upcoming months after Indian Wells had to be canceled, although it is inevitable that Nadal will add more fuel to his tank during clay season if it goes according to plan.

Standing as the greatest player of all time on the slowest surface, Nadal hopes to catch Ashe as soon as possible and extend his legacy as one of the most accomplished players in his teenage years, the 20s and 30s. 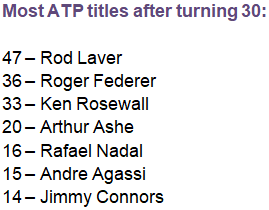