It's not always easy for regular players to win a couple of matches at the Masters 1000 level and advance into the last 16. The task gets much more comfortable when we talk about the chosen ones, who are regular visitors of that round over the previous 15 years or more.

Roger Federer was the leader of the pack with 104 R16 appearances at the Masters 1000 level from 138 tournaments, joined by Rafael Nadal in Rome, with the Spaniard competing at his 119th Masters 1000 tournament this week.

Failing to pass the opening obstacles only 15 times at this series since 2003 (!!), Rafael Nadal is mister consistent when we talk about the premium ATP events, winning 35 titles from 51 finals. Already owning numerous Masters 1000 records, mostly on clay, Rafa will try to add the 36th trophy to his collection on Monday, battling for it for Novak Djokovic, who also stands on 35.

Djokovic is the third player with most R16 appearances, collecting 98 and hoping to reach the milestone 100th next season. Nadal entered Rome after six months break, staying at home after winning Acapulco and skipping Cincinnati and the US Open.

In the first match after 200 days, Nadal toppled the US Open semi-finalist Pablo Carreno Busta 6-1, 6-1, facing Dusan Lajovic in the third round. The Spaniard took down the Serb 6-1, 6-3 in an hour and 30 minutes, continuing where he left against Carreno Busta and advancing into the 93rd Masters 1000 quarter-final.

Rafa lost 15 points in eight service games, suffering two breaks and erasing that deficit with a commanding performance on the return that carried him towards six breaks from 14 opportunities. Rafa landed a forehand crosscourt winner in the first game for a hold at 15, defending his backhand nicely in the second game to grab an early break when Dusan sprayed a forehand error.

Surprisingly, Rafa lost the ground a bit in game three, hitting a loose forehand to suffer a break at love and bring Dusan back into contention, gaining an extra motive to push even harder in the following games.

The fourth game was the most extended one of the entire encounter, with Nadal converting the sixth break chance after an incredible forehand return winner that pushed him 3-1 up.

A service winner secured the fifth game for the defending champion, forcing an error from Lajovic on the return for another break and a massive advantage. Serving for the set, Rafa fired a service winner to wrap it up 6-1 in 41 minutes, eager to repeat that in set number two.

Lajovic kicked off the second set with a double fault that handed a break to Nadal, with the Spaniard landing a volley winner in game two to cement the lead. With nothing working his way, Dusan sent a backhand long in the third game to find himself 3-0 down, having a mountain to climb in front of him if he wanted to challenge a great rival.

Rafa brought the fourth game home with a service winner, only to suffer a break at 4-1 after a forced error. Lajovic reduced the deficit even more after holding at 15 when Nadal netted an easy forehand, reducing the deficit to 3-4 and staying alive.

Nonetheless, Nadal sealed the deal with a break in game nine, moving over the top and advancing into yet another Masters 1000 quarter-final. 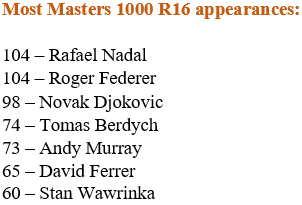 TODAY'S MOST POPULAR
RAFAEL NADAL
'With Rafael Nadal it is difficult to predict the number', says former No. 1
Rafael Nadal joins Roger Federer and Novak Djokovic in exclusive 'Club 60'
ATP Vienna: Andrey Rublev moves closer to Novak Djokovic. Denis Shapovalov bows out
'This year the conditions did not favor Rafael Nadal', says Spanish player
ATP Vienna: Novak Djokovic overcomes slow start to beat Filip Krajinovic
'Roger Federer was kind of the main guy that...', says Australian star
Novak Djokovic dances Despacito with his brother Marko
THIS WEEK MOST POPULAR
ROGER FEDERER
'Roger Federer has 20 Grand Slam wins, but Nadal...', says doubles legend
Djokovic: "If I beat Roger Federer's record I ..."
Rafael Nadal leaves Bjorn Borg behind to stand alone on Major achievement
Stan Wawrinka SHOCK: "This is when I will retire!"
'Rafael Nadal does not move like his 20 years', says top coach
Djokovic: 'People will decide who is better between Federer, Nadal and me'
Dominic Thiem: Vienna player field got unreal after Novak Djokovic signed up to play