Roger Federer, Rafael Nadal and Novak Djokovic have been the dominant force in men's tennis for more than 15 years, achieving numerous records that should stay for good. After losing the US Open title to Dominic Thiem, the 'big 3' have restored the order in Paris, with Rafael Nadal and Novak Djokovic entering the title match and securing their 57th Major since Wimbledon 2003!

Advancing into the semis, Rafa and Novak have cut the deficit to Roger Federer, who still tops the charts with an incredible 46 Major semi-finals. Novak stands on 38 while Nadal is on 34, not enough to catch Roger's tally but hoping to match his 20 Major titles on Sunday, being the more efficient player in the latter stages at the most notable tournaments.

Fighting for the place in the 13th Roland Garros final, Nadal took down Diego Schwartzman 6-3, 6-3, 7-6 in three hours and nine minutes, improving his perfect score in Roland Garros semi-finals to 13-0! Nadal defeated Schwartzman for the tenth time in 11 encounters, avenging the Rome quarter-final loss and remaining on the 20th Major title course.

At 34 years and four months, Nadal became the third-oldest Roland Garros finalist in the Open era behind Andres Gimeno and Ken Rosewall, who achieved that 50 years ago. Rafa had to work hard against an in-form rival, opening a 6-3, 6-3, 4-2 advantage before starting to lose ground, surviving a challenging service game at 5-5 and sealing the deal after taking all seven tie break points to reach the final without losing a set.

Nadal saved nine out of 12 break chances, controlling his games' pace until the second part of the third set and delivering six breaks that earned him victory. Rafa had the upper hand in the shortest and mid-range exchanges, playing aggressive tennis and hitting 38 winners and 34 unforced errors.

The conditions were much different from Rome, and the Spaniard took advantage of that, imposing his strokes and securing the 99th victory in Paris.

In his 38th Major semi-final, Novak Djokovic prevailed over Stefanos Tsitsipas 6-3, 6-2, 5-7, 4-6, 6-2 in three hours and 54 minutes for his 27th Major title match. Tsitsipas lost the crucial points in the opening two sets to fall behind, saving a match point at 4-5 in the third to stay alive.

The Greek stole that set and seized the fourth after fending off ten out of 11 break chances, setting up a decider with momentum on his side of the court. Nonetheless, Novak started all over and toppled the rival in the fifth set to reach the first title match in Paris since 2016 when he claimed the only Roland Garros crown. 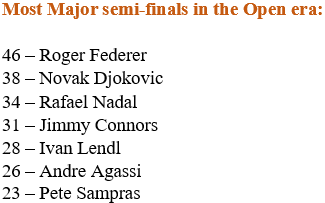