The Open era started in 1968, and we have had 14 players with at least 13 Major semi-finals. The list includes the most prominent names of the Open era (except Rod Laver), with Roger Federer, Rafael Nadal and Novak Djokovic as the leading figures.

On Friday, Nadal earned another record at his beloved Roland Garros, becoming the third Open era player with 13 semi-finals at a single Major. Jimmy Connors and Roger Federer had stood alone on the exclusive charts until Rafael Nadal advanced into the last four in Paris for the 13th time, earning another massive achievement and extending his Roland Garros dominance.

Jimmy Connors played in 14 semi-finals in front of the home crowd at the US Open, the last time in 1991 when he turned 40! Roger Federer joined the list twice, at both the Australian Open and Wimbledon, with Nadal joining the party following yet another impressive result in Paris.

The 34-year-old is through to the final without losing a set, passing the opening four rounds without troubles and fighting hard against Jannik Sinner and Diego Schwartzman to advance into the title match and maintain a perfect record in the semi-final encounters at Roland Garros.

On Friday, Nadal took down the Argentine 6-3, 6-3, 7-6 in three hours and nine minutes, avenging the Rome loss and remaining on the 20th Major crown course. It was Nadal's tenth victory over Schwartzman in 11 encounters, learning his lesson from Rome and delivering the right shots to overpower the rival in straight sets.

At 34 years and four months, Nadal became the third-oldest Roland Garros finalist in the Open era behind Andres Gimeno and Ken Rosewall, who achieved that 50 years ago, proving his class against much younger opponents.

Rafael Nadal is the third player with 13 semi-finals at a single Major.

As was expected, Rafa had to give his best against Diego, opening a 6-3, 6-3, 4-2 advantage before he slowed down a bit, surviving a tough service game at 5-5 and sealing the deal in the tie break to avoid spending more time on the court.

Nadal saved nine out of 12 break chances and grabbed two breaks in each set to control the pace. Delivering aggressive tennis right after the serve, the Spaniard toppled the opponent in the shortest range up to four strokes, having the upper hand in the exchanges and firing 38 winners with 34 unforced errors.

Schwartzman couldn't match those numbers or repeat Rome's level (entirely different conditions), spraying too many mistakes and standing as a decent opponent only in the third set. Rafa opened a 4-1 lead in the first set, closing it at 5-3 and dominating both serve and return in the second.

The Spaniard was up a break twice in the third set. The Argentine erased the deficit and created those break chances at 5-5, denied by forehand winners from Rafa, who claimed the tie break 7-0 to move over the top and earn another Major record. 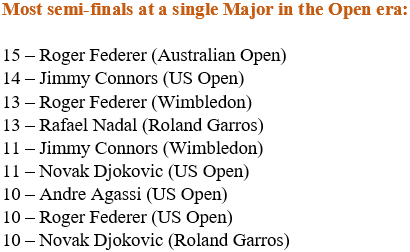 TODAY'S MOST POPULAR
ROGER FEDERER
'The scrutiny that he gets is not extended to Roger Federer and Nadal', says writer
'Roger Federer will play top-level tennis again', says former No. 1
Roger Federer makes finishing touches in Dubai ahead of Doha trip
Jo-Wilfried Tsonga: "Tennis players are no longer motivated as before"
Serena Williams trains with Dimitrov: it's time to play again
Roger Federer's come back: THE AMAZING SKILLS OF THE SWISS
'Roger Federer is the greatest of all time', says ATP star
THIS WEEK MOST POPULAR
TENNIS STORIES
Naomi Osaka's message to Australian Open ball-girl
'Novak Djokovic was not ready to beat Rafael Nadal in Paris', says legend
Nick Kyrgios accused of mistreatment by his former-girlfriend
Andy Murray deleted Twitter and Instagram after watching Netflix documentary
Roger Federer withdraws from Miami and loses 1000 points
'I realized that Rafael Nadal was probably playing with...', says former ATP ace
Serena Williams and her daughter in catsuits!