In June 2019, Rafael Nadal toppled Dominic Thiem in the Roland Garros final, becoming the third player in the Open era with the crown in Paris after turning 33. Andres Gimeno and Ken Rosewall did that in 1968 and 1972, four decades before the Spaniard and in a completely different tennis era.

In those first years of the Open era, the age was just a number since we had many successful players older than 35. Still, it wasn't easy to conquer Roland Garros following the 30th birthday even in those days, with only four players achieving that before 2015 and one between 1973-2014!

Stan Wawrinka joined the list in 2015 before Rafael Nadal regained his Parisian kingdom two years later, celebrating at Roland Garros a couple of days after turning 31. Thus, Rafa became the third-oldest champion of the clay Major after Gimeno and Rosewall, staying undefeated in the French capital in the next three years to enter the record books.

Turning 34 in June, the great Spaniard had to wait for four months before embracing another Roland Garros campaign, with the latest edition taking place in October following the coronavirus pandemic. Facing many challenges, Nadal endured them all to lift the 13th trophy in Paris, becoming the second-oldest Roland Garros champion (34 years and four months) after Andres Gimeno in 1972!

For the fourth time in his career, Rafa claimed the title in Paris without losing a set, making his feat even more impressive, although it was anything but easy for him during the French capital fortnight. Dealing with cold and rainy weather, the new Wilson balls and a roof on Court Philippe-Chatrier, Nadal passed seven obstacles to claim the 13th crown from 16 appearances in Paris, winning 100 out of 102 matches at his beloved Major and writing history books.

Nadal may not be as quick as in his prime years, but to beat him at Roland Garros is still the most challenging task in tennis, the one that requires something special from the rival on the other side of the net.

There wasn't a single one who could produce that level, with Rafa beating all competitors in straight sets to lift the 20th Major trophy, joining Roger Federer at the top of the GOAT race. In the semis, Nadal took down Diego Schwartzman 6-3, 6-3, 7-6 after three hours and nine minutes of a grueling battle, prevailing in the third-set tie break to march into the final without losing a set.

In the title match, Nadal produced a masterclass in a 6-0, 6-0, 7-5 victory over world no. 1 Novak Djokovic, blowing Novak off the court in the opening two sets and staying focused in the third to become a Major champion at 34. 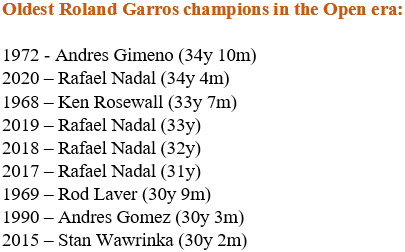 TODAY'S MOST POPULAR
RAFAEL NADAL
Rafael Nadal: 'When that happens, it will be time to say I quit'
Rafael Nadal: 'After that 6-0, many thought that I would beat Djokovic'
Djokovic: "If I beat Roger Federer's record I ..."
Toni Nadal: "Roger Federer is superior to Rafael Nadal, because..."
Rafael Nadal: 'I only do that if it is an insurmountable problem'
ATP Cologne 2: Alexander Zverev sets Jannik Sinner clash. Diego Schwartzman prevails
ATP Antwerp: Alex de Minaur and Grigor Dimitrov advance. Karen Khachanov wastes MP
THIS WEEK MOST POPULAR
SERENA WILLIAMS
WATCH: Olympia refuses to give strawberries to Serena Williams
Rafael Nadal Academy prodigy reaches world number 2. Nadal is thrilled
'Rafael Nadal literally thrashed Novak Djokovic', says former No. 2
'Rafael Nadal and I have reached a stage where we look...', says young star
'Roger Federer had an entourage of 24 people', says top chef
'Nadal won French Open by returning 8 meters behind the baseline', says French ace
'Roger Federer's physique has little to envy that of Nadal', says French ace