World no. 2 Rafael Nadal is chasing the second notable Parisian crown within a month, winning the Roland Garros trophy and looking for more of the same at the Paris Masters. The last Masters 1000 event of the season is among those rare big titles Nadal has never won, losing the final on a debut to David Nalbandian and never returning into the title clash.

With numerous injuries and setbacks in the post-US Open seasons, Nadal was never among the favorites under a roof in Paris, struggling with indoor conditions and trying to change all that this week. Entering Paris as the top seed in the absence of Novak Djokovic, Rafa reached the eighth quarter-final from as many trips to Paris, becoming the fourth player since 1990 with that many appearances in the last eight.

Roger Federer, Novak Djokovic and Tomas Berdych achieved that before him, with both his greatest rivals lifting the trophy at least once, just like the Czech. Federer won the title in 2011 while Djokovic has been the player to beat in Paris in the previous decade, conquering the event five times between 2009-19.

Nadal is through to the last four for the fifth time, beating Pablo Carreno Busta 4-6, 7-5, 6-1 in two hours and 13 minutes. It was Nadal's seventh victory over the younger Spaniard in as many encounters, making a slow start and raising his level to remain on the title course.

Nadal saved four out of five break chances and produced three breaks when it mattered the most to seal the deal and reach the 74th Masters 1000 semi-final. World no. 2 closed the opening game with winners from his volley and a backhand before Carreno Busta added his name on the scoreboard with a service winner.

Serving at 1-1, Rafa fended off a break chance with a forehand crosscourt winner, hitting a service winner in game five to stay in front. Acting strong behind the initial shot, Pablo closed the sixth game in style and secured the first break a few minutes later when Rafa netted a loose forehand.

Gaining momentum, Carreno Busta fired an unreturned serve to clinch the eighth game at love and extend the advantage, bringing the opening set home with a forehand crosscourt winner at 5-4.

Nadal erased three break chances in the second set's first game, winning five straight points to avoid an early setback. An ace pushed the 20-time Major champion 3-2 in front, playing another weak return game to keep the rival on the positive side of the scoreboard.

Finding the rhythm behind the initial shot in those moments, Nadal placed an ace down the T line to clinch the seventh game, earning his first break chances in the next one despite being 40-0 down. Pablo saved them both to escape and level the score at 4-4, moving closer to the finish line.

Nadal moved 5-4 up after the fourth consecutive commanding hold, forcing Carreno Busta to serve for staying in the set. The younger Spaniard hit another booming serve to take that tenth game and mount the pressure on the other side of the net.

Doing his part of the job, Rafa cracked an ace down the T line for a hold at love in game 11, hoping for more chances on the return in the next one. A forehand winner earned the set point for him, cracking another to claim the set and force a decider, with momentum on his side.

From 30-0 down in the first game of the final set, Nadal found his A-game to avoid the danger and deliver a hold. Pablo saved two break chances in game two, forcing a mistake from Rafa to stay alive. Starting all over, Nadal grabbed the third game with an unreturned serve and stole Carreno Busta's serve at love with a backhand winner that sent him 3-1 up.

A former finalist locked the fifth game at love with an ace, taking another big step towards the finish line after seizing a break in game six that sent him 5-1 in front. Serving for the victory, Rafa sealed the deal with a forehand down the line winner, delivering another victory and moving two wins away from the first Parisian title. 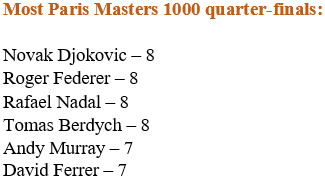