Following another rock-solid season, Rafael Nadal has secured another ranking milestone. The Spaniard has become the second player with 900 consecutive weeks in the top-100, joining Roger Federer at the top of the list and leaving Jimmy Connors, Feliciano Lopez, David Ferrer, Fernando Verdasco and Ivan Lendl behind him.

The 20-time Major champion has been a synonym for consistency, cracking the top-100 in April 2003 at 16 and becoming one of the world's leading players soon after that. Rafa has been ranked inside the top-10 since April 2005, collecting almost 800 consecutive weeks in the elite group and never leaving it despite challenging periods caused by injuries.

Entering the 2003 season from outside the top-200, Rafa grabbed 19 Challenger triumphs in the first three months and reached the third round at Masters 1000 debut in Monte Carlo, earning enough points to find himself in the top-100 as by far the youngest player in that group.

Nadal scored two wins in Hamburg and Wimbledon, advanced into the semi-final in Umag and claimed the title in Segovia Challenger to wrap up the season inside the top-50. At 17 years and six months, Rafa became the fourth-youngest player since 1973 to achieve that after Michael Chang, Aaron Krickstein and Bjorn Borg.

In 2004, Nadal's progress was halted with an injury, doing enough to stay in the top-100 and becoming world no. 2 a year later after the first Major title at Roland Garros and four Masters 1000 crowns.

Rafael Nadal became the second player with 900 consecutive weeks in the top-100.

It was Nadal's breakthrough season and he has remained at the top ever since, collecting 20 Major titles and 35 Masters 1000 trophies to stand high in the GOAT race.

At 34, Rafa is still among the world's leading players, claiming two ATP titles in 2020 and securing the 20th Major. Nadal lost the ATP throne after the Australian Open, suffering the quarter-final loss to Dominic Thiem and bouncing back in Acapulco, where he lifted the 85th ATP title.

Staying at home for the next six and a half months due to the coronavirus, Nadal decided to skip Cincinnati and the US Open, returning to the court in September and suffering the quarter-final loss at the Rome Masters. Heading to Roland Garros with three matches in his legs since the end of February, Nadal saved his best tennis for the beloved Major, claiming the 13th Parisian crown without losing a set and joining Federer on 20 Majors.

In the rest of the season, Rafa lost in the Paris Masters quarter-final and reached the same round at the ATP Finals in London, serving for the win but losing to Daniil Medvedev in three sets. 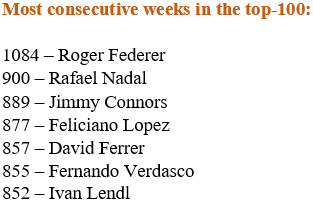