The 20-time Rafael Nadal defeated Cameron Norrie 7-5, 6-2, 7-5 in the Australian Open third round to remain on the title course and write history. Rafa became only the third player in the Open era with 30 consecutive sets won at Majors, starting his streak at the last year's Roland Garros and winning ten matches in straight sets to join Roger Federer and John McEnroe on the exclusive list!

In his most outstanding season, McEnroe won 35 consecutive sets at Wimbledon and the US Open 1984, passing Bjorn Borg's 28 straight sets claimed in 1980 and holding the record until Roland Garros 2007! Roger Federer kicked off his streak in the 2006 US Open final and extended it after conquering the Australian Open without dropping a set next January.

The Swiss passed McEnroe at Roland Garros before losing a set to Tommy Robredo in the quarter-final, ending his streak on 36. Nadal joined the charts after ten commanding victories since his beloved Roland Garros last October, dealing with cold and rainy Parisian weather, new Wilson balls and a roof above Court Philippe-Chatrier.

Nadal overcame all seven opponents in straight sets and played well above the rest of the field to write history books on his best surface, remaining the king of clay for another year.

Rafael Nadal has won 30 consecutive sets at Majors in Paris and Melbourne.

Settling into an excellent rhythm right from the start, Rafa lost only 23 games in the opening four encounters to sail into the quarters and gain confidence ahead of more challenging encounters.

The Spaniard had to give his best against the young Italian Jannik Sinner in the quarter-final, trailing in sets one (Jannik served for the set at 6-5) and two before scoring a 7-6, 6-4, 6-1 triumph in just under three hours.

In the semis, Diego Schwartzman kept Nadal on the court for over three hours and had a chance in the third set before Rafa prevailed 6-3, 6-3, 7-6 to set Novak Djokovic title clash. Saving his best tennis for the most formidable opponent, Rafa toppled Novak 6-0, 6-2, 7-5 in two hours and 41 minutes, controlling the rallies and bringing the victory home for a massive celebration of the 20th Major crown.

Despite not playing at 100% due to a back injury, Nadal scored three decisive wins in Melbourne against Laslo Djere, Michael Mmoh and Cameron Norrie, achieving those 30 consecutive sets won and hoping for more against Fabio Fognini. 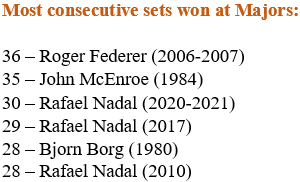