On Sunday, Rafael Nadal earned his tenth Rome Open crown following a hard-fought 7-5, 1-6, 6-3 triumph over world no. 1 Novak Djokovic. The encounter lasted for two hours and 50 minutes, with two great rivals pushing each other to the limits in the most crucial clash ahead of the season's second Major at Roland Garros.

Thus, Rafa secured the 36th Masters 1000 crown to match Djokovic's record, bouncing back from the quarter-final losses in Monte Carlo and Madrid to earn numerous records. It was Nadal's 22nd victory over world no. 1 player and the first since the last year's Roland Garros final when he defeated Djokovic in straight sets.

Nadal's first triumph over the leader of the ATP ranking came in March 2004 against Roger Federer when he was only 17, staying competitive for almost two decades and still standing as one of the players to beat on the Tour.

Sunday's win over Novak was Rafa's 22nd against world no. 1, extending his record and leaving Boris Becker on 19. Ivan Lendl and Novak Djokovic share third place with 14 victories over world no. 1, followed by Andy Murray, who stands on 12.

Rafa threw everything he had on Novak in the Rome Open final, firing 37 winners and 23 unforced errors to overpower a great rival and beat him for the 28th time in 57 encounters! Nadal won only a couple of points more than Djokovic, trailing in the more extended rallies and erasing that deficit in the quickest exchanges up to four strokes that secured the victory for him.

They broke each other in the encounter's early stages and stayed neck and neck for over an hour in the opening set. Nadal grabbed a crucial break at 5-5 when Novak netted an easy forehand and held after deuce to wrap up the set and gain momentum.

Djokovic raised his level in set number two and left Nadal far behind with a double break, rattling off five straight games to become a favorite ahead of the decider. Battling hard to remain in touch, Rafa saved break chances at 2-2 in the final set and grabbed a break at love in the next one to open a 4-2 gap.

Djokovic saved a match point in game eight with a service winner before Nadal moved over the top with a hold at 30 a few minutes later. 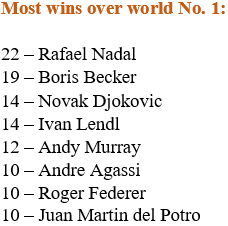