Last week, Rafael Nadal grabbed the 36th Masters 1000 title, matching Novak Djokovic's record and achieving the fourth 'La Decima.' Rafa made a debut in Rome in 2005 and turned it into an instant success, winning 68 out of 75 matches and claiming ten titles.

Nadal suffered only one loss before the quarter-final round, competing in the last eight for 16 times and earning another impressive record. In April, Nadal played his 16th Monte Carlo Masters quarter-final, repeating that at Foro Italico and becoming the second player after Roger Federer with at least 16 quarter-finals at multiple ATP tournaments!

Jimmy Connors achieved that at the US Open, followed by Roger Federer, who has no less than 17 quarter-finals at Wimbledon, Halle and Basel. Rafa's 16th Rome quarter-final came after wins over young guns Jannik Sinner and Denis Shapovalov, with the Spaniard stood at the exit door against the latter!

Nadal faced the fellow top-20 player Jannik Sinner in the second round and defeated a teenager 7-5, 6-4 in two hours and ten minutes. Sinner threw everything he had at Rafa, but it wasn't enough to stay competitive and force a decider, despite the lead in both sets.

The Spaniard didn't play well against Alexander Zverev in Madrid and was determined to fix that in Rome and produce more aggressive and dynamic tennis. Rafa finished the clash with 25 winners and 21 unforced errors, firing 19 direct points from his forehand and looking good on the court despite three breaks he suffered.

Rafael Nadal is the second player with 16 quarter-finals at two ATP tournaments.

Nadal had the upper hand in the shortest and more extended rallies and didn't allow his opponent to dictate the exchanges, leaving the court happy with how he performed. Jannik was in front twice in the opener, wasting that and finding himself 7-5 down.

Nadal had to dig deep from 4-2 down in set number two, rattling off four straight games to seal the deal without having to play a decider. The Spaniard was a point away from failing to reach the quarters for only the second time in Rome, prevailing over Denis Shapovalov 3-6, 6-4, 7-6 after saving two match points in the deciding set's 12th game!

Denis played aggressive tennis from start to finish, firing over 40 winners and staying in touch with the king of clay in the shortest and mid-range exchanges. Nadal came back from 6-3, 3-0, 40-30 down, remaining composed and stealing the second set to prolong the match and his chances.

The Canadian was a break in front in the final set before the Spaniard erased the deficit, playing better and creating more opportunities at 5-5. Shapovalov saved break points and earned those two match points in game 12, which Nadal repelled to stay alive and brought the victory home in the tie break.

It was Nadal's 16th victory after saving at least one match point, showing his well-known fighting spirit and refusing to surrender at one of his favorite events. Rafa advanced into his 16th Rome Open quarter-final and defeated Alexander Zverev, Reilly Opelka and Novak Djokovic to celebrate the tenth crown, 16 years after winning the first. 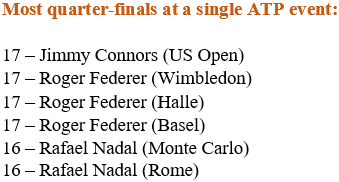