Rafael Nadal, Novak Djokovic and Roger Federer have been the finest competitors at the Masters 1000 series for over 15 years, earning 100 titles combined and securing many records that will never get broken. For an illustration of their dominance, it's enough to check the Masters 1000 semi-final charts, with six players entering the last four at least 30 times.

While Pete Sampras, Andre Agassi and Andy Murray have barely reached that number, Federer, Djokovic and Nadal have raised the bar to another level and left their closest rivals far behind. Federer stands on 66 Masters 1000 semi-finals, while Novak Djokovic secured his 70th in Rome two weeks ago.

Rafael Nadal is the leader of the pack, claiming the 75th semi-final at Foro Italico in his 17th consecutive season with at least one Masters 1000 semis! Still as a teenager, Nadal played in mind-blowing five Masters 1000 semi-finals in 2005, becoming one of the most consistent players at the premium ATP series and advancing to at least three for 15 seasons in a row!

Last year, Nadal continued his streak at the third and final Masters 1000 event in Paris, failing to repeat that this spring in Monte Carlo and Madrid before improving his game in Rome to claim the tenth Foro Italico title.

Nadal has 14 semi-finals in Monte Carlo, followed by 12 in Rome, 11 in Madrid and ten in Indian Wells. Miami and Canada stand on seven, with five semi-finals in Paris.

Rafael Nadal is the record-holder with 75 Masters 1000 semi-finals.

In Rome, Nadal made a winning start following a hard-fought 7-5, 6-4 victory over the fellow top-20 player Jannik Sinner.

Rafa lost serve on three occasions and chased the result in both sets, overcoming two deficits in the opener and bouncing back from 4-2 down in set number two to advance into the last 16. The Spaniard had to dig deep against Denis Shapovalov in the next match, prevailing 3-6, 6-4, 7-6 after saving two match points!

Nadal trailed 6-3, 3-0, 40-30, remaining composed and stealing the second set to prolong the encounter and stay alive. The Canadian kept fighting and built the advantage in the final set before Nadal bounced back and returned to the positive side.

Shapovalov saved break chances at 5-5 and earned those two match points in game 12, wasting both and allowing Rafa to seal the deal in the tie break. In the quarters, Rafa needed two hours to dismiss Alexander Zverev 6-3, 6-4, avenging the Madrid Open loss and advancing into the 75th Masters 1000 semi-final. 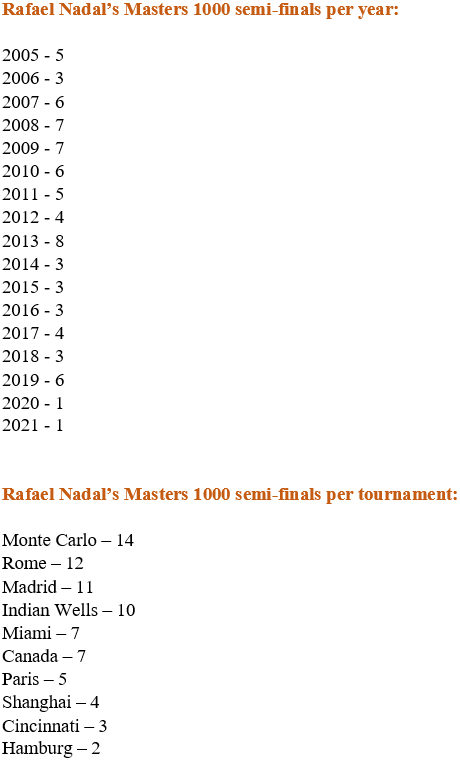