Since the beginning of the Open era in 1968, only five players have reached at least 12 semi-finals at a single ATP event. Staying competitive for over a decade is never easy, and you need exactly that to achieve this, especially when we talk about multiple tournaments.

Novak Djokovic, Ivan Lendl and Jimmy Connors have performed that once, with the Serb joining two other legends a couple of weeks ago in Rome. Roger Federer stands above everyone else, reaching at least 12 semi-finals at the ATP Finals, Halle, Basel, Wimbledon, the Australian Open and Indian Wells.

Dominating the clay swing for over 15 years, Rafael Nadal has secured second place on the list, advancing into 12 semi-finals at four notable clay-court tournaments at Roland Garros, Monte Carlo, Barcelona and Rome. Nadal has been the semi-finalist in Monte Carlo on 14 occasions, followed by 13 in Paris and Barcelona.

Two weeks ago, Nadal secured his 12th semi-final at Foro Italico in Rome, becoming the second player with at least 12 semi-finals at four different ATP tournaments after Federer. After two quarter-final losses in Monte Carlo and Madrid this spring, Rafa was eager to improve his run in Rome and chase the tenth title.

Rafael Nadal is the second player with 12 semi-finals at four different ATP events.

The 20-time Major champion had to work hard right from the start, facing the fellow top-20 player Jannik Sinner in the second round. Sinner broke Rafa thrice and led twice in the opening set before losing it 7-5.

Nadal trailed 4-2 in set number two before taking four straight games that carried him over the finish line and into the third round. Denis Shapovalov could have spoiled Nadal's party, opening a 6-3, 3-0, 40-30 advantage and earning two match points before Rafa prevailed 3-6, 6-4, 7-6!

Not finding the rhythm, Rafa struggled to impose his strokes for a set and a half, erasing the second set deficit and forcing a decider where he stood on the verge of defeat at 5-6. The Canadian wasted two match points and the Spaniard sealed the deal in the tie break to reach the quarters. 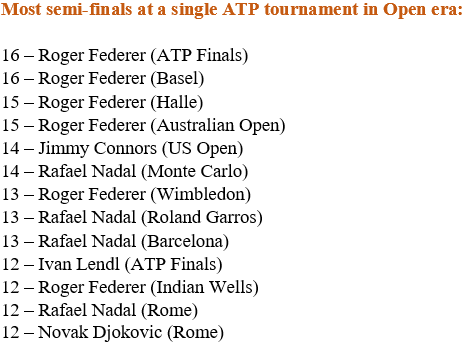