Since the start of the Open era in 1968, 35 players have scored at least 100 Major victories. With 100 triumphs at a single Major, you are becoming an instant legend, a multiple champion and a proud owner of many records that will take some beating in the future!

Roger Federer and Rafael Nadal are the only players with 100 wins at a single Major event, building their legacy for 15 or 20 years and standing tall on 20 Major trophies each. Federer claimed 102 triumphs at the Australian Open for an ultimate record, counting to six titles and numerous semi-finals to reach that number.

The Swiss added 101 wins at the All England Club, securing eight Wimbledon crowns and missing a chance to add more in some tight finals he has lost over the years. Rafael Nadal wrote the history books at the last year's Roland Garros, toppling Novak Djokovic in the title clash to celebrate the 13th Parisian crown and the 100th victory from only 102 encounters, a feat that will never be repeated at a single Major event!

Seeking the 14th Roland Garros title and the 21st Major that would put him ahead of Roger, Rafa made a winning start in Paris this week, toppling Alexei Popyrin 6-3, 6-2, 7-6 in two hours and 23 minutes. It was the Spaniard's 101st victory in Paris, matching Roger's Wimbledon tally and hoping to catch his Australian Open record on Thursday.

Rafael Nadal is the second player with 101 victories at a single Major after Federer.

Nadal made a debut at Roland Garros in 2005, securing 13 titles from 16 trips to Paris and losing only two matches in 2009 and 2015. Nadal's last Roland Garros loss came against Novak Djokovic in the quarter-final six years ago, winning four straight titles since 2017 and standing as the favorite for another one on June 13.

Nadal played on a high level in the opening two sets against Popytin, dropping only five games and looking good to seal the deal quickly in the third. Alexei started to play better and opened a 5-2 advantage in the third set, delivering one good hold after another and serving for the set in game nine.

Showing his fighting spirit, Nadal fended off two set points and pulled the break back to prolong the action. Gathering momentum, the Spaniard sealed the deal in the tie break to move over the top and set the second-round clash against Richard Gasquet. 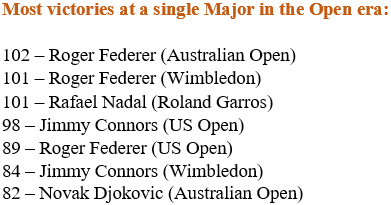