Rafael Nadal made a Major debut at Wimbledon 2003, a couple of weeks after turning 17. The Spaniard reached the third round as one of the youngest players in history to carve his path at the most notable tennis events and announce his future results.

Struggling with injuries in 2004, Nadal had to wait until the Australian Open 2005 to advance into the fourth round for the first time, enjoying his time in Melbourne before losing to Lleyton Hewitt in five sets. Rafa claimed the first Major title a couple of days after turning 19 at Roland Garros that spring, writing tennis history as the last teenager with a Major crown.

In the following 16 years, Nadal has been one of the players to beat at Major events, playing 61 of those before this week's Roland Garros and claiming 20 titles from 28 finals! Nadal has scored three wins in Paris so far to advance into the fourth round for the 16th time from 17 Parisian trips, achieving another milestone as the third player with 50 fourth rounds at Majors!

Roger Federer and Novak Djokovic earned that before Nadal, and the Spaniard is now in the same group with them, leaving Jimmy Connors, Ivan Lendl and Andre Agassi in the "40s'"

Rafael Nadal is the third player with 50 appearances in a Major fourth round.

Reaching 50 fourth rounds from 62 Major tournaments is a testimony of Nadal's consistency on the most prominent tennis scene, winning 20 titles so far and almost 300 victories.

It is so far so good for Rafa in his 17th Roland Garros campaign, beating three rivals to advance into the last 16 and remain on the course for the 14th Roland Garros crown. In the opening round, Rafa ousted Alexei Popyrin 6-3, 6-2, 7-6, overcoming a 5-2 deficit in set number three and two set points to move over the top in the tie break.

In the second match, Nadal defeated Richard Gasquet 6-0, 7-5, 6-2 to celebrate the 17th victory from as many encounters against the Frenchman. On Saturday, the Spaniard battled past Cameron Norrie 6-3, 6-3, 6-3 in two hours and seven minutes, losing serve twice in the second set and producing six breaks to control the scoreboard and move into the last 16 for the 50th time at Majors. 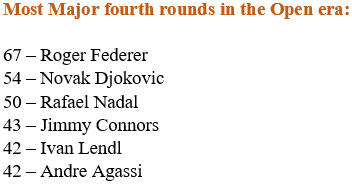