As always in the past with a Major event on the board, we could expect significant ranking turmoils, with 2000 points up for grabs. The Australian Open has fitted into that frame so far, producing ups and downs and keeping the top of the rankings exciting and uncertain until the very last match on Sunday night.

The defending champion Novak Djokovic and Dominic Thiem will fight for the title in Melbourne, with Novak seeking the eighth crown down under and Thiem looking to win the first Major crown overall, losing two Roland Garros finals to Rafael Nadal in the previous two years.

Both Novak and Dominic will seek the title and ranking positions on Monday, with the Serb trying to regain the ATP throne away from Rafael Nadal and start chasing Roger Federer's record of 310 weeks as world no. 1. Djokovic grabbed six victories at the ATP Cup and 665 points, reducing the gap to the Spaniard who couldn't defend the points from Melbourne, losing to Thiem in the quarter-final and leaving the battle for the highest-ranking position wide open.

Ahead of the final, Nadal is on 9395 points while Djokovic stands on 8920, hoping to add 800 more to his tally and become world no. 1 again. Rafael Nadal won more points at Melbourne Park than in the previous year but that may not be enough to keep him in the top-3, with Dominic Thiem trailing only 85 points ahead of the title match, hoping to crack the top-3 for the first time in a career if he beats Novak on Sunday.

Daniil Medvedev had to drop down to the fifth after an early exit at the Australian Open, still keeping a significant lead over the last year's semi-finalist Stefanos Tsitsipas who dropped out in the third round. Alexander Zverev had a terrible start of the year, heading to Melbourne with no expectations and flying under the radar to reach the semis, his first at Majors, earning 720 points to stand almost 1000 ahead of Matteo Berrettini who ended his Australian Open journey in the second round.

Roberto Bautista Agut is dropping out from the top-10 on Monday, replaced by David Goffin who is just a couple of hundred points in front of the rivals behind him, with many interesting battles coming between them in February and March. 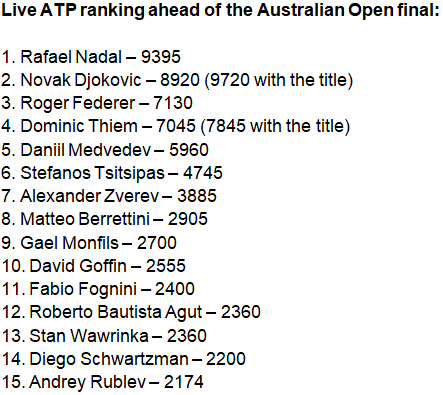