The third edition of the NextGen Masters will take place in November in Milan, with the best players born in 1998 or later battling for seven direct spots. The defending champion Stefanos Tsitsipas is miles in front of all the rivals after the first five months, collecting 2805 points so far after 29 wins and two titles in 2019.

After great runs in Madrid and Rome, Stefanos took a week off and he is ready to do the damage at Roland Garros as well, passing the opening two rounds to enter the last 32. Stefanos is almost 2000 points clear of the first contender, with an 18-year-old Felix Auger-Aliassime becoming the second player this year who has passed the 1000-mark.

The young Canadian competed in the second ATP final in Lyon, adding his name to an exclusive list of players with multiple ATP finals before turning 19, the first player to achieve that since Andy Murray in 2006! Auger-Aliassime had the opportunity to become the seventh player since 2000 with an ATP title before the 19th birthday after Lleyton Hewitt, Andy Roddick, Rafael Nadal, Gael Monfils, Andy Murray and Kei Nishikori but Benoit Paire proved to be too strong in the title match, which wasn't the worst thing that happened to Felix.

He suffered groin injury that forced him to skip Roland Garros where he was supposed to be a seeded player. Denis Shapovalov had the opportunity to beat Benoit Paire in the quarter-final in Lyon, falling in the third set tie break and losing early at Roland Garros as well to finish the unsuccessful clay run this spring and stay on 785 points, leaving Frances Tiafoe on 740.

The American lost in the opening round in Paris in five sets but he is still a safe passenger for Milan at the moment, standing 200 points clear of Casper Ruud who is through to the second round at Roland Garros. Returning from an injury, the Aussie Alex de Minaur has also scored an important win after being sidelined for a couple of months, still having a handful lead over Miomir Kecmanovic who earned the first Grand Slam win at Roland Garros, ousting Denis Kudla in five sets.

Corentin Moutet has become the first player born in 1999 in the third round at Roland Garros, earning valuable points in the battle for that last direct spot in Milan, with Mikael Ymer also enjoying a nice run in Paris after a maiden win at this level. 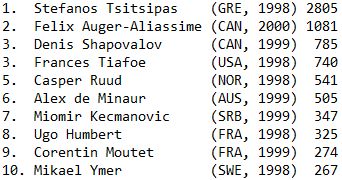 TODAY'S MOST POPULAR
TENNIS STORIES
Dominic Thiem's ​​new girlfriend!
'It was a terrible sight, Roger Federer could hardly move', says writer
'Novak Djokovic's athleticism is from another world', says ATP legend
Former coach: 'Rafael Nadal and Novak Djokovic will win only one Major in 2021'
Jo-Wilfried Tsonga: 'After beating Roger Federer, I urinated blood'
'I'm ready to challenge Rafael Nadal on clay', says Top 10
'Roger Federer makes it fun', says agent
THIS WEEK MOST POPULAR
MARIA SHARAPOVA
Maria Sharapova: "That's why I never took US citizenship"
Roger Federer: 'After I end my tennis career I would live...'
Raffaella Reggi: "Serena Williams has lost shine"
Simon Graf: 'Roger Federer ruined Rafael Nadal's Australian Open celebration'
Rafael Nadal: 'All I can do is accept it and take the path of peace'
Chardy against Novak Djokovic and Serena Williams because ...
'We saw Novak Djokovic looked like he was punch-drunk', says top coach