With ATP 250 events and four Challengers in the week behind us, the young guns had the opportunity to chase titles and decent points in the battle for the NextGen Masters in Milan. World no. 6 and the best U21 star Stefanos Tsitsipas was beaten in the first round in s-Hertogenbosch, missing a chance to increase his tally of 32 wins so far in 2019 and extend the gap to the players behind him even more.

The Greek is over 1700 points ahead of Felix Auger-Aliassime who had another great week, reaching the final in Stuttgart on grass debut, becoming the youngest player since Rafael Nadal with three ATP finals. The Canadian saved a match point against Dustin Brown in the semis before losing to Matteo Berrettini in the title match after wasting five set points in set number two, earning 150 points and cementing the advantage over Denis Shapovalov and Frances Tiafoe who are not at his level at the moment.

Shapovalov is almost 450 points behind the younger compatriot, dropping eight of the last ten matches since Miami and hitting exit door in Stuttgart in round one. Tiafoe has scored just one win in s-Hertogenbosch and Queen's, standing 25 points behind Shapovalov and 100 in front of Casper Ruud who took a week off after reaching the semi-final at Prostejov Challenger.

The struggling Aussie Alex de Minaur is still in contention for the spot in Milan, accumulating a significant lead over Corentin Moutet who has moved to the seventh spot after winning Lyon Challenger, his second of the season.

At the moment, Corentin is the last player who would qualify for the NextGen Masters directly, passing Miomir Kecmanovic who will have to work harder to catch the rivals ahead of him and book the place in Milan, so as Mikael Ymer and Ugo Humbert who complete the top-10 list. 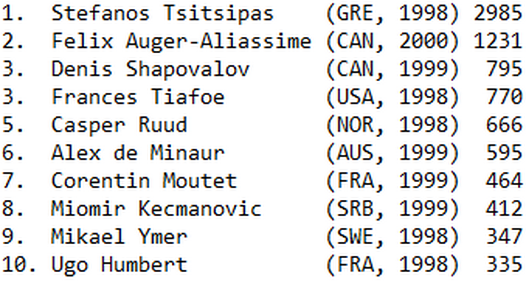