With two ATP 500 events and five Challenger tournaments, the young guns had numerous opportunities to gain the points in the battle for the place at the NextGen Masters in Milan in November. Stefanos Tsitsipas is the first player who has passed the 3000-point mark, reaching the quarter-final stage where Felix Auger-Aliassime toppled him in straight sets.

An 18-year-old Canadian played in the final in Stuttgart two weeks ago and was the semi-finalist at Queen's, becoming the youngest player with two semi-finals on grass since Boris Becker in 1985 and increasing the gap over the struggling compatriot Denis Shapovalov.

Denis is the third player on the list but mostly due to the results before April, reaching the semi-final in Miami and earning only 120 points since then, winning two of the last 11 encounters on the Tour! Despite this terrible streak, Shapovalov is still in front of Frances Tiafoe (795-770), with the American losing in the first round at Queen's to Nicolas Mahut to stay on 13 triumphs in 2019.

The Norwegian Casper Ruud is still 100 points behind Tiafoe, training at home on clay and taking some time off ahead of Wimbledon. Alex de Minaur had a short campaign at Queen's as well, suffering the first-round loss to Aljaz Bedene and staying on 595 points, enough to book the place in Milan at the moment but probably not for long if he fails to find the form in the upcoming months.

Corentin Moutet holds the last direct spot for the NextGen Masters at the moment, winning the title in Lyon two weeks ago and failing to repeat the similar result in Bratislava last week, dropping out in the second round to stay without points.

Miomir Kecmanovic is the main contender for that final direct spot in Milan at the moment, making a winning start at the ATP 250 event in Antalya and hoping for more of the same in the rest of the week. 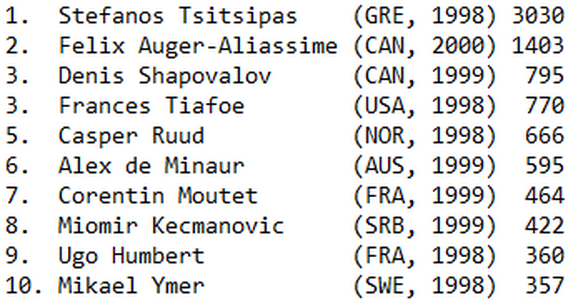 TODAY'S MOST POPULAR
Former Wimbledon champion Marion Bartoli announces she is expecting first child
THIS WEEK MOST POPULAR
The most beautiful players of the last decade - Murray, Sharapova, Lopez and...
Powered by: World(D) 1.6