The third Grand Slam of the season at Wimbledon provided an excellent opportunity for the young guns to earn some big points and boost their chances of securing a spot at the U21 NextGen Masters in Milan in November. Nonetheless, only a couple of players used it like they would have wanted, with the majority of the competitors from the top of the list failing to make an impression and grab points at the All England Club.

Stefanos Tsitsipas is the leader of the pack but it is not likely he is going to defend the title in Milan, looking good to book the spot at the ATP Finals in London if he delivers more notable results in the rest of the season.

Stefanos has won 34 matches and more than 3000 points so far in 2019 but none of those came at Wimbledon, losing in the opening round to Thomas Fabbiano in five sets, frustrated with the way he performed. Felix Auger-Aliassime had played rock-soild tennis in Stuttgart and Queen's before heading to Wimbledon where he advanced into the third round after wins over Vasek Pospisil and Corentin Moutet.

Labeled as one of the dark horses and already seen in the fourth round against Novak Djokovic, Felix didn't bring his best tennis and Ugo Humbert defeated him in the third round, reducing the Canadian on 90 points at his first Wimbledon campaign.

Felix is now almost 700 points clear of his compatriot Denis Shapovalov who had another mediocre run at Wimbledon, bowing out to Ricardas Berankis in the first round and suffering the tenth defeat in the previous 12 encounters since Miami!

Denis is still third on the list, though, with Frances Tiafoe losing in the first round for the third straight tournament, missing the opportunity to move ahead of Shapovalov but still looking good to play in Milan for the second consecutive year.

After losing in the first round at Wimbledon to John Isner, Casper Ruud added more points to his tally at Braunschweig Challenger, standing 23 points ahead of Miomir Kecmanovic who had to retire in the second round against Benoit Paire.

Ugo Humbert had a memorable Wimbledon debut, defeating Gael Monfils, Marcel Granollers and another young gun Felix Auger-Aliassime before losing to world no. 1 Novak Djokovic in straight sets. Ugo is currently 57 points behind Kecmanovic and this is the most exciting battle at the moment if Stefanos Tsitsipas decides to compete in Milan again. 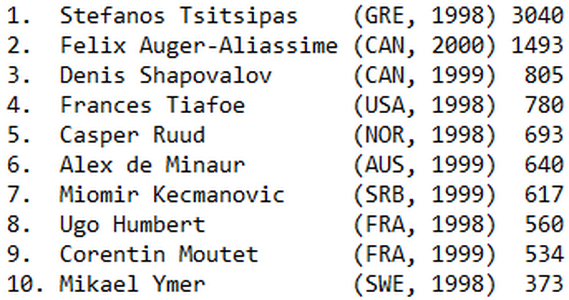