The week behind us was a quiet one in terms of the young guns and their results, with no changes in the top-6 positions in the U21 Race to Milan. Nonetheless, there was one shift in the battle for that last direct spot at the NextGen Masters, as Ugo Humbert moved in front of Miomir Kecmanovic.

With 3040 points on his tally, Stefanos Tsitsipas is the leader of the pack despite a poor Wimbledon run, standing strong in the ATP Race to London that will probably keep him away from the title defense in Milan. Felix Auger-Aliassime is his closest rival with 1493 points, almost 700 ahead of the struggling compatriot Denis Shapovalov who has lost ten of the last 12 matches since Miami.

Denis is still 25 points ahead of Frances Tiafoe who hasn't played well after Miami too, trying to change that this week in Atlanta. Casper Ruud has missed a chance to move closer to Shapovalov and Tiafoe, losing in the opening round of Bastad to Damir Dzumhur and staying on 693 points.

Kicking off the season with nine ATP wins on home soil in Australia, Alex de Minaur struggled with injuries and had only a couple of solid wins, standing sixth in the standings ahead of Ugo Humbert who is just two points behind him.

Hungry for more points in the battle for Milan, the Aussie will seek deeper run in Atlanta together with Humbert and Miomir Kecmanovic who are the remaining players with more than 600 points on the list. Ugo was the semi-finalist in Newport, earning enough points to pass Kecmanovic and grab that seventh spot that leads to Milan directly.

De Minaur, Humbert and Kecmanovic are separated by 23 points and it should be interesting to follow their results in Atlanta this week and who will emerge at the top next Monday. 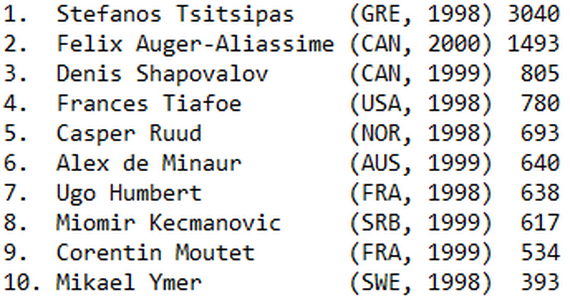