The updated U21 Race to Milan list has delivered some significant changes in the battle for seven direct places at the NextGen Masters in November. Stefanos Tsitsipas returns to action this week in Washington for the first time since the first-round loss at Wimbledon, seeking more points in the battle for the ATP Finals as will almost certainly skip the title defense in Milan.

The youngest player in the top-10, Felix Auger-Alissime plays in Washington as well, hoping to extend the gap over the players behind him and to punch Milan ticket as soon as possible. Those two players are above all the others but Alex de Minaur caused a big chance on the list behind them, winning the second ATP title of the season in Atlanta in great style to pass Denis Shapovalov, Frances Tiafoe and Casper Ruud, cementing his position before the last three months of the season.

Struggling with injuries since February, de Minaur came to Georgia with 14 ATP wins under his belt (only five after the Australian Open), finding the winning rhythm again and never facing a break point in four matches to wrap up the title and 250 points.

Denis Shapovalov has not won a match since Lyon and will not have the opportunity to change that in Washington, withdrawing from the ATP 500 event and preparing for the home Masters 1000 event in Montreal. As always in the last few weeks, Denis is 25 points ahead of Frances Tiafoe who has also struggled to find the 'A game' in a previous couple of months, hoping to change that in Washington and add more points to his tally.

Casper Ruud claimed one victory in Hamburg for 45 points, keeping himself ahead of Miomir Kecmanovic and Ugo Humbert who are fighting for the last direct spot in Milan (they will both play in Stefanos Tsitsipas withdraws).

Kecmanovic competed in the third ATP quarter-final of the season in Atlanta, beating Humbert 6-2, 6-2 in the second round to pass the Frenchman on the list, holding Corentin Moutet and Mikael Ymer far behind. The Swede claimed the second Challenger title in Tampere and will need more of those if he wants to reduce the gap to Kecmanovic and Humbert and get in contention for the NextGen draw. 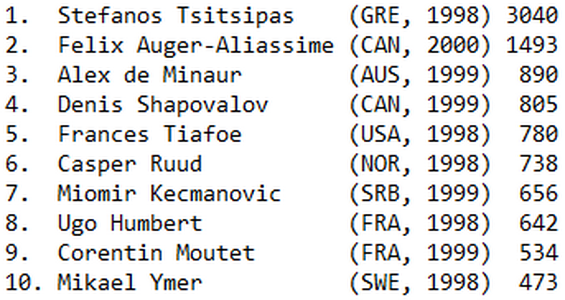 TODAY'S MOST POPULAR
SERENA WILLIAMS
Serena Williams trains with her daughter in Australia!
Dominic Thiem: 'Rafael Nadal is in the league of his own at Roland Garros'
Roger Federer: 'You can’t have a career as long as I have unless...'
Dominic Thiem: 'I want to beat Rafael Nadal and win Roland Garros'
Boris Becker: 'Novak Djokovic made right and legitimate move'
Serena Williams' Wimbledon win less likely than Harry and Meghan's divorce
Roger Federer: 'Only hard work gets you to your ultimate goals'
THIS WEEK MOST POPULAR
WTA TENNIS
Venus Williams getting married soon?
Garbine Muguruza: "Roger Federer's proposal will end up in oblivion"
'There was no way Roger Federer could win matches...', says legend
Naomi Osaka's last quarantine post infuriated the fans!
Adele’s “Set Fire to The Rain” featuring Roger Federer and Rafael Nadal
Serena Williams' daughter shows her two-handed backhand!
'We would beat Roger Federer, Rafael Nadal and Djokovic now', says ATP ace