A year and a half ago, the 14-year-old Carlos Alcaraz qualified for the first professional tournament at home Spain F5 Futures in Murcia, beating three rivals to find himself in the main draw where he earned two triumphs, reaching the quarter-final and becoming the first player born in 2003 with ATP points!

This January, Carlos was the semi-finalist at M15 Palmanova event, still before turning 16, followed by the first win at Challenger level in Alicante in April, delivering the first success for his generation at this level of competition.

A week later, Alcaraz grabbed two wins at Murcia Challengers for more points on his tally, standing as one of the youngest players on the reduced ATP ranking list. Last week, Carlos Alcaraz wrote history books again, conquering M25 Denia tournament to become the first player born in 2003 with the professional title, accomplishing that at the age of 16 years and two months to become the eighth-youngest Futures winner since this level of competition was introduced in 1998!

Richard Gasquet and Mario Ancic are the only players to win the Futures title before turning 16 and there are also Andrey Rublev, Rafael Nadal, Novak Djokovic, Duck Hee Lee and Felix Auger-Aliassime who are on that list as well, with the Spaniard becoming the youngest champion since the Canadian who claimed the first title in 2016.

In the first round, Alcaraz defeated Alejandro Moro Canas 6-2, 6-4 in an hour and 30 minutes before notching an identical triumph over the doubles specialist Sergio Martos Gornes in an hour and 35 minutes, dropping serve once and delivering four breaks on the other side to advance into the quarter-final.

There, another qualifier Diego Augusto Barreto Sanchez kept Carlos on the court for almost three hours, with the youngster prevailing 6-4, 2-6, 6-3 after four breaks on each side. At 2-2 in the decider, Alcaraz claimed four of the last five games to move over the top, earning a break at love in game six and keeping it until the end to move into the semis.

Carlos Boluda Purkiss stood between Carlos and the spot in the final, beating the more experienced rival 3-6, 6-4, 7-6 in two hours and 26 minutes, wasting a 3-1 lead in the decider but controlling the pace in the tie break to seal the deal and enter the first professional final.

In one of the youngest title matches on the Futures level, the youngest one since Kecmanovic and Shapovalov in the USA in 2016, Carlos prevailed against Timofei Skatov 6-4, 6-3 in an hour and 28 minutes to write history for his generation and secure the place on the special age list.

Carlos played better on the second serve, suffering three breaks and delivering eight on the other side to move over the top, opening a big advantage in both sets to bring them home and lift the trophy. 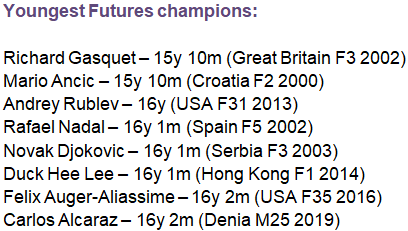 TODAY'S MOST POPULAR
ROGER FEDERER
On this day: Novak Djokovic ends Roger Federer's record-breaking streak
Alexander Zverev: I ask myself why did Olga Sharypova make all this up
'Tennis without Roger Federer is always...', says former Top 5
'Novak Djokovic tried what ATP should have done,' says Pablo Carreno Busta
'Roger Federer, Nadal, Djokovic will not be at the top for long and...', says coach
'When I play Roger Federer, Rafael Nadal and Djokovic...', says ATP ace
Stefanos Tsitsipas: 'I was a bit unlucky against Novak Djokovic in Paris'
THIS WEEK MOST POPULAR
NOVAK DJOKOVIC
Conor McGregor attacks Novak Djokovic!
Novak Djokovic: 'The first thing I'm gonna do on Friday morning...'
Rafael Nadal learns his first opponent of the season
'Rafael Nadal and Dominic Thiem should have at least said something,' states..
Patrick Mouratoglou: 'I sent Serena Williams' game to a higher level'
Roger Federer: 'I don’t think my shoulder would survive that'
Naomi Osaka: 'I really admire Serena Williams'