World no. 8 Stefanos Tsitsipas is till the player to beat in the U20 group despite another early loss in Cincinnati. After wasting a match point in the semi-final in Washington against Nick Kyrgios, Stefanos lost in the second round in Montreal to Hubert Hurkacz and also in the opening match in Cincinnati to Jan-Lennard Struff, losing ground a little bit and hoping to regain it at the US Open.

Felix Auger-Aliassime is in the top-20 on the ATP ranking list for the first time in career despite the second-round loss to Miomir Kecmanovic in Cincinnati, outplayed by the fellow U21 star completely to bow out in 63 minutes.

Felix is still the big favorite to kick off the NextGen Masters as the top seed if Stefanos Tsitsipas withdraws, leaving Alex de Minaur 600 points behind despite the third round that the Aussie reached in Cincinnati after ousting Marco Cecchinato and Reilly Opelka.

Denis Shapovalov is still miles his best form, scoring one win just like in Montreal but struggling against Lucas Pouille to end the campaign in the second run, finding no range on the return and getting broken once in each set to stay on 17 victories in 2019.

Casper Ruud qualified for the main draw in Cincinnati, losing to Guido Pella in two tight sets and missing the opportunity to add more points to his tally and cement the position ahead of the final two months of the season, having a small lead in front of Frances Tiafoe who lost in the second round in Cincinnati, earning just eight wins this season outside the Australian Open and Miami.

Miomir Kecmanovic claimed six victories in Atlanta, Washington and Cincinnati, defeating Alexander Zverev last week for the first top-10 win and looking better and better to secure the spot in Milan as one of the title favorites.

Ugo Humbert has not played after Atlanta and he is the last player who would qualify for the NextGen Masters at this moment if Tsitsipas skips title defense, forging a healthy lead over Corentin Moutet and Mikael Ymer. 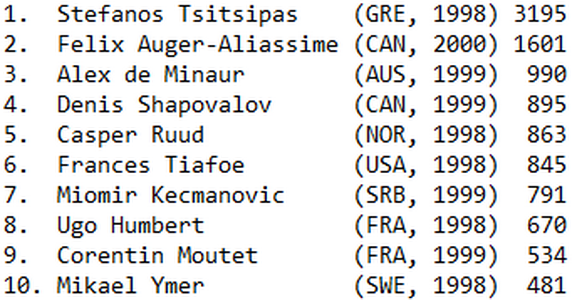