World no. 7 Stefanos Tsitsipas had been the U21 player of the week, reaching the final in Beijing and improving his chances of reaching the ATP Finals for the first time. The Greek is the defending champion at the Next Gen Masters in Milan and it is almost clear he will not defend the crown in November, focusing on the London campaign and chasing huge 1500 points against the most fearsome field he could face.

Stefanos has won 3460 points to dominate the U21 Race to Milan list, leaving Felix Auger-Aliassime almost 2000 points behind despite not lifting the trophy in the Chinese capital. After losing in the opening round at four straight ATP tournaments, Stefanos raised his level in Beijing to topple Dusan Lajovic, the defending champion Nikoloz Basilashvili, John Isner and Alexander Zverev, advancing into the eighth ATP final and winning the opening set there before Dominic Thiem took charge to steal the crown.

Heading to Beijing after four straight defeats, Felix Auger-Aliassime ousted Albert Ramos-Vinolas in the first round before taking just four games against Alexander Zverev, failing to reach the quarter-final at another tournament after Queen's in June and hoping for a better run in the remaining weeks of the season and in Milan if he decided to play there.

Zhuhai champion Alex de Minaur is also a safe passenger for Milan despite an early loss in Tokyo to Lloyd Harris in the deciding set tie break, staying 210 points ahead of Denis Shapovalov who had to leave Tokyo after the second round, with David Goffin prevailing in two tie breaks.

Frances Tiafoe is the first player below the 1000-point mark but should be in Milan as well, playing only three tournaments after Winston-Salem and losing them all to the fellow youngsters Alexander Zverev and Denis Shapovalov.

Casper Ruud is 39 points behind the American but he retired against Miomir Kecmanovic in Zhuhai and hasn't played since, still looking strong to find himself in Milan next month. Miomir Kecmanovic lost to Denis Shapovalov in the first round in Tokyo but that shouldn't change anything, with the Serb keeping the sixth place (if Tsitsipas withdraws) ahead of Ugo Humbert and Mikael Ymer who are about to battle for the seventh and last direct spot at the Next Gen Masters.

Humbert and Ymer are among the top seeds at Mouilleron le Captif Challenger event, with the Swede eyeing to reduce the gap over the Frenchman and grab that last direct ticket to Milan. 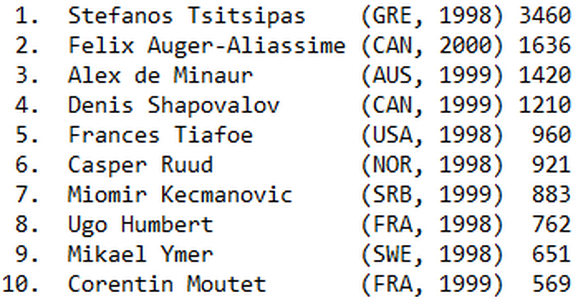