Twelve months ago, we already had three players with more than 300 points in the U21 Race to the Next Gen Finals in Milan after the Australian Open, with Stefanos Tsitsipas reaching the semis and Frances Tiafoe falling in the quarters, both beaten by Rafael Nadal.

The generation of players born in 1998 is not in contention for the place in Milan, leaving those born in 1999 or later to fight for seven direct spots that lead towards the fourth Next Gen Finals in November. The familiar faces are at the top following the first month of the season but the results are not there, with only one player who has managed to collect 200 points, by only just!

World no. 16 Denis Shapovalov is the leader of the pack, scoring two wins at the ATP Cup against Stefanos Tsitsipas and Alexander Zverev before losing to Novak Djokovic in the deciding tie break, delivering powerful performance against world no.

2. Denis reached the quarter-final at the ASB Classic in Auckland before experiencing a setback at the Australian Open, losing to Marton Fucsovics in the very first round to stay empty-handed and away from a chance of gaining higher ranking positions.

Corentin Moutet is currently ranked second behind the Canadian, qualifying for the main draw in Doha and advancing into the first ATP final where Andrey Rublev defeated him in straight sets. Corentin lost to Marin Cilic in the first round of the Australian Open and will now compete on clay during the South American swing, seeking more points and the best possible run ahead of returning to hard.

Alex de Minaur earned 140 points at the ATP Cup, suffering an abdominal tear injury that forced him to skip Adelaide and the Australian Open, needing more time to recover and start competing again. Felix Auger-Aliassime is fourth, winning just three matches so far in 2020 for a mediocre start.

Following a poor campaign at the ATP Cup, Felix lost an excellent semi-final in Adelaide to Andrey Rublev before an unexpected first-round loss in Melbourne to Ernests Gulbis, asking for a wild card in Montpellier this week and hoping for a fresh start.

Miomir Kecmanovic, Alexei Popyrin, Emil Ruusuvuori, Jannik Sinner and others are yet to find their best tennis in the new season as well, eager for better results in the month of February that offers a variety of ATP events on different surfaces and conditions. 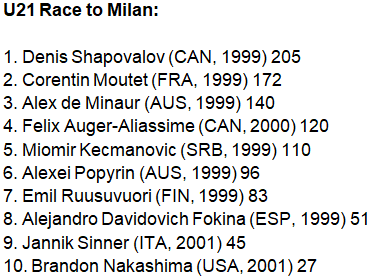 TODAY'S MOST POPULAR
ROGER FEDERER
Roger Federer's come back EMOTIONAL and MOTIVATING video!
Novak Djokovic's Schedule for 2021
'I would have loved it if Roger Federer, Nadal and Djokovic...', says ATP star
'I don’t think Roger Federer knows himself', says top journalist
'After Roger Federer won the Australian Open 2017...', says writer
'After Roger Federer, Nadal, Djokovic's retirement, it will be...', says ATP star
Novak Djokovic steps in and writes to Craig Tiley during the Melbourne controversy
THIS WEEK MOST POPULAR
ROGER FEDERER
Roger Federer: 'After I end my tennis career I would live...'
Raffaella Reggi: "Serena Williams has lost shine"
Maria Sharapova: "That's why I never took US citizenship"
Simon Graf: 'Roger Federer ruined Rafael Nadal's Australian Open celebration'
Rafael Nadal: 'All I can do is accept it and take the path of peace'
Chardy against Novak Djokovic and Serena Williams because ...
'We saw Novak Djokovic looked like he was punch-drunk', says top coach